Greenville is the county seat of Pitt County, principal city of the Greenville metropolitan area, and the 10th largest city in the state of North Carolina. Greenville is the health, entertainment, and educational hub of North Carolina's Tidewater and Coastal Plain. The city's official population as of the 2013 United States census estimate is 89,130 residents while the Greenville Metropolitan Area includes 174,263 people. In January 2008 and January 2010, Greenville was named one of the nation's "100 Best Communities for Young People" by the America's Promise Alliance. In June 2012, Greenville was ranked in the top ten of the nation's "Best Small Places For Business And Careers" by Forbes Magazine. In 2010 Greenville was ranked twenty-fourth in mid-city business growth and development by Forbes Magazine.

The city is also known as "BMX Pro Town USA", as it is home for many top professional BMX riders. Greenville is the home of East Carolina University, the third-largest university and fastest-growing campus in the University of North Carolina system, and Vidant Medical Center, the flagship hospital for Vidant Health and the teaching hospital for the Brody School of Medicine. The city has the fifth-highest percentage of residents in North Carolina – almost 30 percent – who have obtained bachelor's degrees.

Greenville was founded in 1771 as "Martinsborough," after the Royal Governor Josiah Martin. In 1774 the town was moved to its present location on the south bank of the Tar River, three miles (5 km) west of its original site. In 1786, the name was changed to Greenesville in honor of General Nathanael Greene, the American Revolutionary War hero. It was later shortened to Greenville.

During Greenville's early years, the Tar River was a navigable waterway; and by the 1860s there were several established steamboat lines transporting passengers and goods on the river. Cotton was the leading agricultural crop, and Greenville became a major cotton export center. Before the turn of the century, however, tobacco surpassed cotton and became the leading money crop. Greenville became one of the state's leading tobacco marketing and warehouse centers.

For over a century, Greenville was recognized only as an important tobacco market and the home of a small state-supported college, charted by the Legislature in March 1907 and named East Carolina Teacher's Training College, a co-ed institution. By the mid 1960s, East Carolina College had become the third-largest state-supported college, and enrollment approached 8,000 students — twice the 1960 enrollment figure. In 1967, it became East Carolina University. ECU Medical School admitted its first four-year class in 1977. At the turn of the century, enrollment at ECU topped the 18,000 mark, and now exceeds 27,500 students.

Greenville's current economic development began in 1968 when Burroughs Wellcome, a major pharmaceutical research and manufacturing firm, located in the city. The site is now owned by Patheon, which employs approximately 1,200 people. The city and Pitt County have also become home to many other major industries and businesses including Harper Brush, NACCO Materials Handling Group, Grady-White Boats, and ASMO. Greenville is also home to The HammockSource, the world's largest hammock manufacturer.

Damages in Pitt County alone were estimated at $1.6 billion (1999 USD, $1.87 billion 2006 USD). Some residents in Greenville had to swim six feet underwater to reach the front doors of their homes and apartments. Due to the heavy flooding in downtown Greenville, the East Carolina Pirates were forced to relocate their football game against #9 Miami to N.C. State's Carter-Finley Stadium in Raleigh, where they beat the Hurricanes 27-23.

Like most of the state and all of its lower areas, Greenville has a humid subtropical climate.

Greenville is within the Middle Atlantic Coastal Forests ecoregion of the much larger Tropical and subtropical coniferous forest biome.

There were 25,204 households out of which 23.0% had children under the age of 18 living with them, 30.8% were married couples living together, 13.8% had a female householder with no husband present, and 52.4% were non-families. 35.4% of all households were made up of individuals and 6.4% had someone living alone who was 65 years of age or older. The average household size was 2.18 and the average family size was 2.91.

As with most of North Carolina, Greenville is predominately Protestant Christian, with large concentrations of Baptists, Episcopalians, Methodists, and various other evangelical groups. Presbyterians, and Disciples of Christ, also constitute a significant portion of the population.

The Roman Catholic community in Greenville has seen steady growth over the years with the migration of Hispanic workers to the area along with significant numbers of people from the Mid-Atlantic and northeastern United States who work for East Carolina University, the Vidant Health, and other employers. St. Peter's Catholic Church in Greenville supports a day school for grades K-8. Pope John Paul II Catholic High School supports grades 9 - 12.

Over the years, Greenville's Jewish community has seen continued growth. Congregation Bayt Shalom, a congregation affiliated with both Reform Judaism and Conservative Judaism, has around 80 member families and was previously led by the first African-American female rabbi in the United States, Alysa Stanton.

The growth and diverse nature of the city's population has also resulted in the addition of an Islamic Mosque and Hindu Temple within the last decade. 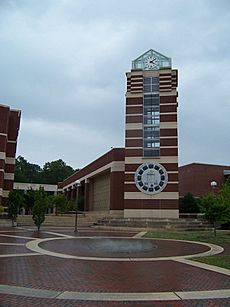 Greenville is home to a wide range of cultural events on and off the East Carolina University campus. East Carolina University offers musical concerts, theatrical and dance productions, travel films, and lectures. The Greenville Museum of Art contains local art, as well as rotating exhibitions. Annually over 3,000 children participate in programs offered by the Museum and over 12,000 people visit the museum.

Theater is beginning to emerge in Greenville as well. Local groups such as the Greenville Theater Project and the Magnolia Arts Center offer outlets for both performers and audiences alike. Smiles and Frowns Playhouse produces children's theatre. Additionally, student groups such as SWASH Improv offer entertainment at the university and local establishments.

Aficcionados of sacred organ and choral music have a major outlet in the city of Greenville in the form of the East Carolina Musical Arts Education Foundation, a non-profit organization centered on the Perkins & Wells Memorial Organ, C.B. Fisk, Opus 126 housed at St. Paul's Episcopal Church. The Foundation offers numerous organ and choral concerts annually, plus educational initiatives. The impressive Fisk organ at St. Paul's Episcopal Church is also the primary teaching and performing instrument for East Carolina University, with which St. Paul's and ECMAEF make up a strategic alliance.

Along with Theater, Dance is becoming prominent in Greenville. The Greenville Civic Ballet and the North Carolina Academy of Dance Arts are the main contributors of dance to the community. The Greenville Civic Ballet, owned by Kimberly Gray Saad, holds performances showcasing different dance backgrounds and styles. They hold biannual performances including Cinderella, Peter and the Wolf, Sleeping Beauty and Nutcracker Suites. Greenville Civic offers a diverse dance culture. The North Carolina Academy of Dance Arts is owned by Sherryl Tipton and collaborates with ECU's dance major program. NCADA does an annual Nutcracker performance in winter and in spring does a studio showcase. NCADA keeps a traditional dance culture in Greenville's community. Pared with the innovation of Greenville Civic's performances, the community is thriving with dance.

Many restaurants and nightclubs offer live entertainment on the weekends. In the old Five Points area (in the newly renovated parking lot at Evans and Fifth Streets) every Wednesday in warm months, an Umbrella Market features local growers and producers plus crafts people. This is also the venue for "Freeboot Friday" on Fridays in the fall when there is a Saturday ECU home football game. It is an "Alive-At-Five" style pep-rally with live music, ECU cheerleaders, exhibits, children's activities, food samplings, and a beer and wine garden. The Downtown area is known for its large annual Halloween street party and live music bars. Considering the size of the city, Greenville has a large number of bars and nightclubs located downtown, due in large part to the location of ECU's campus which is immediately adjacent to downtown.

Downtown Greenville has seen a huge resurgence since the recession. The area has been renamed to Uptown Greenville and has become the arts and entertainment hub of the area. Currently, Uptown Greenville houses over 20 restaurants and over 25 retail stores. It hosts several events throughout the year such as Sunday in the Park, The Umbrella Market, Freeboot Fridays and the Uptown Art Walk.

Several major U.S. and state highways serve the area to provide easy access to the interstate highway system. Major highways that run through the area include US 264 (Martin Luther King Jr. Highway), NC 11 (Memorial Drive), US 13, NC 33, NC 43, and NC 903. Greenville is North Carolina's largest city without a major interstate; however, Interstate 95 is located 29 miles (47 km) to the west of the city. Greenville's busiest roads are along Memorial Dr., Greenville Blvd., Arlington Blvd., 10th St., and Fire Tower Rd. With 2,364.6 people per square mile, Greenville is the most congested city in Eastern NC. NCDOT is expected to begin property acquisition for the southwest bypass in 2015. It will stem from the 264 intersection on Statonsburg Road, bypass Winterville, and terminate approximately 11 mi (17.7 km) later in Ayden. A new project called the 10th St Connector Project is also underway to connect existing 10th St to Stantonsburg Rd.

Greenville is also served by freight railroads. CSX Transportation moves the northern and southern parts of Greenville, Norfolk Southern Railway serves the eastern and western parts of Greenville. In 2012, Southeastern Tours, Inc started operating an AMTRAK shuttle bus service, which began taking passengers to and from Wilson, North Carolina, a stop on the AMTRAK Carolinian Route.

Greenville is in the process of building a more comprehensive system of greenways for bicycle and pedestrian transportation. The first section of the South Tar River Greenway opened in late 2009; the second section, linking a small and large dog run park with East Greenville was completed and dedicated in June 2011. The third section, uniting the Town Common (Downtown Greenville area) with the East Carolina University Schools of Allied Health, Dentistry, Medicine and Nursing, plus the Vidant hospital complex is now in the paid for and planning stage.

All content from Kiddle encyclopedia articles (including the article images and facts) can be freely used under Attribution-ShareAlike license, unless stated otherwise. Cite this article:
Greenville, North Carolina Facts for Kids. Kiddle Encyclopedia.