Voice of America facts for kids 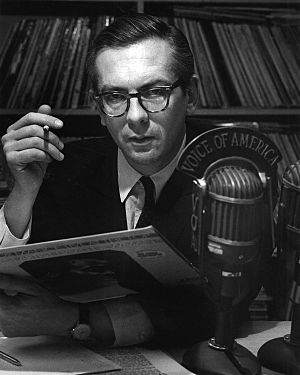 During the Cold War, VOA's budget was reduced. On August 1, 1953, VOA was separated from the Department of State and it was included under the Information Agency. VOA moved its headquarters from New York to Washington, DC. next year. In 1959 VOA started "Special English" programs. In the 1980s, VOA also added a television service, as well as special regional programs to Cuba, Radio Marti and TV Marti.

One of VOA's famous programs was remembered as "Jazz Hour" presented by Willis Conover.This program continued for 40 years, and its record remains at the National Museum of American History, also known as ""Smithsonian".

The Voice of America broadcasts in 46 different languages. Television broadcasts are marked with a star:

All content from Kiddle encyclopedia articles (including the article images and facts) can be freely used under Attribution-ShareAlike license, unless stated otherwise. Cite this article:
Voice of America Facts for Kids. Kiddle Encyclopedia.