Neil Alden Armstrong (August 5, 1930 – August 25, 2012) was an American astronaut and historian and is known as the first person to walk on the moon. On July 20, 1969, Neil Armstrong and Buzz Aldrin landed on the moon in a small spacecraft that had been sent to the moon using the Saturn V rocket. The rocket was called Apollo 11. They both walked on the moon, and millions of people watched and heard this event on live television.

In 2005 he received the Honorary Doctorate of letters from the University of Southern California. The Houston Chronicle newspaper reported on October 1, 2006, that Australian computer programmer Peter Shann Ford found the missing "a" from Armstrong's famous first words on the Moon. Ford reported that he downloaded the audio recording from a NASA web site and analyzed it using editing software originally intended for use with hearing disabled people. Armstrong is said to have been pleased with Ford's finding of the missing "a".

He was born in Ohio and grew up in several different locations in that state.

Neil Armstrong discovered his passion for flying when he was 2 years old. His father used to take him to the Cleveland National Air Races. When he was young he would help his parents around the house like weeding the garden and hanging the laundry, he would do this with his sister June and brother Dean. Neil Armstrong also loved reading books. In the first grade, he read 90 books. Because of this, he skipped the second grade.

He took his first airplane ride at age 6. He built model airplanes and conducted experiments in a homemade wind tunnel. He worked at a pharmacy and took flying lessons. He was licensed to fly on his 16th birday, before he got his driver's license. Armstrong enrolled in Purdue University to study aeronautical engineering but was called to duty with the U.S. Navy in 1949. 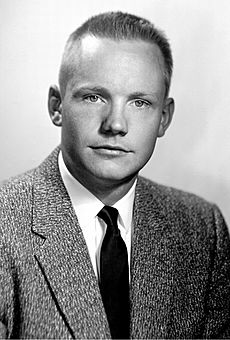 Armstrong, 26, as a test pilot at the NACA High-Speed Flight Station at Edwards AFB, California 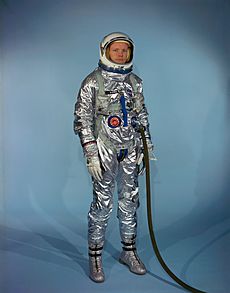 Armstrong in an earlyGemini spacesuit

Prior to being an astronaut, Armstrong was called to Pensacola Naval Air Station in Florida in 1949 before he could complete his degree. There he earned his pilots wings at 20 years of age, making him the youngest flyer in his squadron. While studying for his aeronautical engineering degree, the Korean War broke out in 1950, in which he flew 78 combat missions. His plane was shot down once and he was also awarded 3 Air Medals. Later, he became a skilful test pilot, flying right to the atmosphere’s edge, 207,500 feet (63,200 m) at 4,000 miles per hour (6,400 km/h), in the experimental rocket powered aircraft the X-15. Armstrong went on his first mission into space on the 16th of March 1966, in the spacecraft Gemini 8, as the command pilot. He docked the Gemini 8 successfully with an Agena target craft that was in orbit already. Although the docking was smooth enough, while the spacecrafts orbited together, they started to roll and pitch. Armstrong then managed to undock the Gemini, and regained control of the spacecraft by using the retro rockets. However, this resulted in the astronauts having to make an emergency landing into the Pacific Ocean. 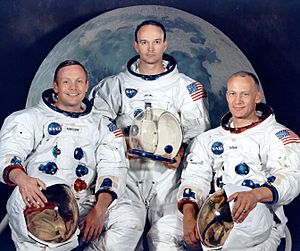 His most famous quote is: "That's one small step for (a) man, one giant leap for mankind. "

He spoke those words when he set his foot on the moon. He wanted to say "That's one small step for a man…", but for some reason the "a" was never spoken. Armstrong thought he had said it. Listening to the audio shows that the "for" runs on smoothly, giving no time for "a" to be spoken. Armstrong prefers written quotations to include the "a" in parentheses!

Armstrong was married to Janet Shearon from 1956 until they divorced in 1994, they had three children; Mark, Eric, and Karen. Lastly he married Carol Held Knight from 1994 until his death in 2012.

Some years after returning from the Moon, he visited the two thousand year-old King Herod's Temple Mount compound ruins in the city of Jerusalem. While he was there, Neil Armstrong said it was more exciting to step on the stone stairs where Jesus Christ walked than even stepping on the Moon.

His biography describes him as a deist. 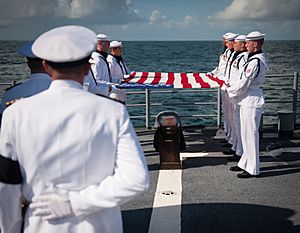 Armstrong died on the morning of August 25, 2012 from complications of a blocked coronary artery after surgery in a hospital in Cincinnati, Ohio. He was 82 years old.

All content from Kiddle encyclopedia articles (including the article images and facts) can be freely used under Attribution-ShareAlike license, unless stated otherwise. Cite this article:
Neil Armstrong Facts for Kids. Kiddle Encyclopedia.