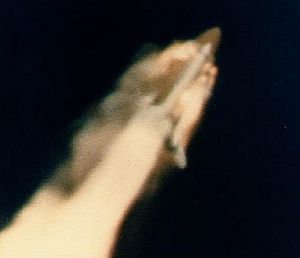 The Space Shuttle Challenger disaster occurred on January 28, 1986, when the NASA's Space Shuttle Challenger broke up 73 seconds after liftoff. All seven crew members were killed. It was the 25th flight of a Space Shuttle. The cause of the explosion was a part called an O-ring that broke in the right solid rocket booster. During the flight, hot gases escaped from the O-ring and made it break apart. Shuttles stopped flying for two and a half years.

It was unusually cold on the morning of the Space shuttle's launch. The engineers argued that the Challenger should not take off because the temperature was 31 °F (−1 °C; 273 K) and the O-Rings could not seal right if the temperature was under 53 °F (12 °C; 285 K). The NASA commanders did not agree and said that the backup O-ring would work. They were later proved wrong. The temperature was so low that icicles were hanging from some parts of the launch pad.

At a little more than a minute after liftoff, the engines increased power to produce the highest thrust possible (known as throttling up). The flight controllers informed the shuttle crew that their flight status was "go" at the throttle-up stage. The flight commander Dick Scobee responded with "Roger, go at throttle up." However, at 72 seconds after liftoff, the right booster pulled away from one of the parts attaching to the external tank. Right then, the Challenger suddenly went off its intended path, which may have been felt by the crew. Half a second later, Smith said the last words picked up by the recorder designed to record all interactions in the crew area of the shuttle during flight: "Uh oh...". Smith may have been responding to the shuttle's computer telling him that the engines were moving quickly to compensate for the now loose booster in a useless attempt to get the shuttle back on the planned path.

Little is known of what happened in the minutes after the breakup. The crew cabin was still intact as it started falling. The official report into the disaster says that the crew survived the first breakup and that at least three people were still alive. They were able to move switches which required a cover to be pulled off before they could be moved, probably when they tried to regain control of the craft. The crew cabin did not have any kind of parachute, and it smashed into the ocean after falling for 2 minutes and 45 seconds at roughly 207 miles per hour (333 kilometres per hour). Any crew that might have survived the first break up died instantly with more than 200 times the force of normal gravity. This is like going from 0 to over 4,400 miles per hour (7,100 kilometres per hour) and then slowing back down to 0 all within a second.

Many people wanted to know why the Challenger exploded. President Ronald Reagan asked for a report about the disaster. It was called the Rogers Commission Report and it was written by a group of astronauts, scientists and engineers. They worked out what had happened and why the Challenger exploded. The report said that the people in charge at NASA did not listen to the engineers who said the O-rings were not safe; and that sometimes the people in charge thought that parts of the shuttle were well made when they were not. They also wrote that NASA sometimes did unsafe things because people would get angry if the shuttle launches were delayed.

All content from Kiddle encyclopedia articles (including the article images and facts) can be freely used under Attribution-ShareAlike license, unless stated otherwise. Cite this article:
Space Shuttle Challenger disaster Facts for Kids. Kiddle Encyclopedia.