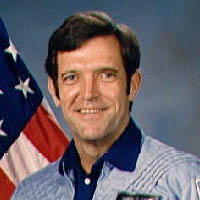 Francis Richard "Dick" Scobee (May 19, 1939 - January 28, 1986) was an American astronaut. He was flying as the commander of Space Shuttle Challenger when the shuttle exploded. In the explosion, Scobee and six other astronauts were killed.

Scobee was selected for NASA's astronaut program in January 1978 and he completed his training in August 1979. In April 1984, Scobee piloted the Challenger mission STS-41-C, which successfully deployed one satellite and repaired another.

He was elevated to the role of spacecraft commander for the STS-51-L mission (Challenger mission). The mission was designed to deploy a satellite to study the approaching Halley's Comet and to inaugurate the Teacher in Space Project. It was delayed several times due to bad weather and technical glitches. When they did the mission, an O-ring seal failure destroyed the shuttle 73 seconds into the flight, killing Scobee and the other six members of the crew; the tragedy was viewed live on national television and prompted several days of national mourning.

All content from Kiddle encyclopedia articles (including the article images and facts) can be freely used under Attribution-ShareAlike license, unless stated otherwise. Cite this article:
Dick Scobee Facts for Kids. Kiddle Encyclopedia.