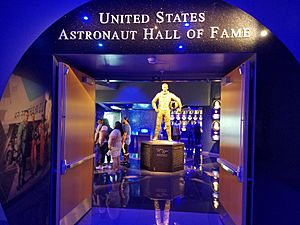 Statue of Alan Shepard, the first American in space and the fifth person to walk on the Moon, located at the entrance

The United States Astronaut Hall of Fame, located inside the Kennedy Space Center Visitor Complex Heroes & Legends building, honors American astronauts and features the world's largest collection of their personal memorabilia, focusing on those astronauts who have been inducted into the Hall; as well as Sigma 7, the fifth manned Mercury spacecraft, and also the Gemini IX spacecraft. 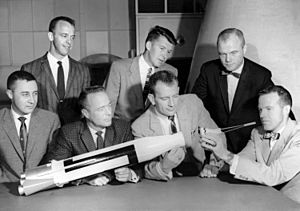 In the 1980s, the six then-surviving Mercury Seven astronauts conceived of establishing a place where US space travelers could be remembered and honored, along the lines of halls of fame for other fields. The Mercury Seven Foundation and Astronaut Scholarship Foundation were formed and have a role in the current operations of the Hall of Fame. The foundation's first executive director was former Associated Press space reporter Howard Benedict. 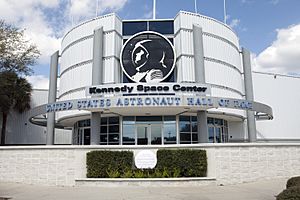 Entrance to the original Astronaut Hall of Fame

The Astronaut Hall of Fame was opened on October 29, 1990, by the U.S. Space Camp Foundation, which was the first owner of the facility. It was located next to the Florida branch of Space Camp.

The Hall of Fame, which was originally located just west of the NASA Causeway, closed to the public on November 2, 2015, in preparation for its relocation to the Kennedy Space Center Visitor Complex 6 miles (9.7 km) to the east on Merritt Island. Outside of the original building was a full-scale replica of a Space Shuttle orbiter named Inspiration (originally named "Shuttle To Tomorrow" where visitors could enter and view a program). Inspiration served only as an outdoor, full scale, static display which visitors could not enter. After the Hall of Fame was transferred to the KSC Visitor Complex, Inspiration was acquired by LVX System and was placed in storage at the Shuttle Landing Facility at the Kennedy Space Center; in 2016, the shuttle was loaded on to a barge to be taken for refurbishment before going on an educational tour.

The building was purchased at auction by visitor complex operator Delaware North and renamed the ATX Center, and for a time housed educational programs including Camp Kennedy Space Center and the Astronaut Training Experience. Those programs have since been moved to the KSC Visitor Complex, and as of December 2019, the structure was being offered for lease. In July 2020, Lockheed Martin announced it would lease the building to support work on the NASA Orion crew capsule.

Inductees into the Hall of Fame are selected by a blue ribbon committee of former NASA officials and flight controllers, historians, journalists, and other space authorities (including former astronauts) based on their accomplishments in space or their contributions to the advancement of space exploration. Except for 2002, inductions have been held every year since 2001.

Thirteen astronauts from the Gemini and Apollo programs were inducted in the second class of 1993. This class included the first and last humans to walk on the Moon, Neil Armstrong and Eugene Cernan; Ed White, the first American to walk in space (also killed in the Apollo 1 accident); Jim Lovell, commander of the famously near-tragic Apollo 13; and John Young, whose six flights included a moonwalk and command of the first Space Shuttle mission.

The third class was inducted in 1997 and consisted of the 24 additional Apollo, Skylab, and ASTP astronauts. Notable members of the class were Roger Chaffee, the third astronaut killed in the Apollo 1 fire and the only unflown astronaut in the Hall; Harrison Schmitt, the first scientist and next-to-last person to walk on the Moon; and Jack Swigert and Fred Haise, the Apollo 13 crewmembers not previously inducted.

Over four dozen astronauts from the Space Shuttle program have been inducted since 2001. Among these are the late Sally Ride, the first American woman in space; Story Musgrave, who flew six missions in the 1980s and 90s; and Francis Scobee, commander of the ill-fated final Challenger mission.

In 2016, inductees included Brian Duffy and Scott E. Parazynski. Ellen Ochoa and Michael Foale were announced as the 2017 class of the United States Astronaut Hall of Fame. The 2019 inductees are James Buchli and Janet L. Kavandi. Michael López-Alegría, Scott Kelly and Pamela Melroy are the 2020 inductees.

The Hall of Heroes is composed of tributes to the inductees. Among the Hall of Fame's displays is Sigma 7, the Mercury spacecraft piloted by Wally Schirra which orbited the Earth six times in 1962. An Astronaut Adventure room includes simulators for use by children.

The spacesuit worn by Gus Grissom during his Mercury flight is on display and has been the subject of a dispute between NASA and Grissom's heirs and supporters since 2002. The spacesuit, along with other Grissom artifacts, were loaned to the original owners of the Hall of Fame by the Grissom family when it opened. After the Hall of Fame went into bankruptcy and was taken over by a NASA contractor in 2002, the family requested that all their items be returned. All of the items were returned to Grissom's family except the spacesuit, because both NASA and the Grissoms claim ownership of it. NASA claims Grissom checked out the spacesuit for a show and tell at his son's school, and then never returned it, while the Grissoms claim Gus rescued the spacesuit from a scrap heap.

All content from Kiddle encyclopedia articles (including the article images and facts) can be freely used under Attribution-ShareAlike license, unless stated otherwise. Cite this article:
United States Astronaut Hall of Fame Facts for Kids. Kiddle Encyclopedia.