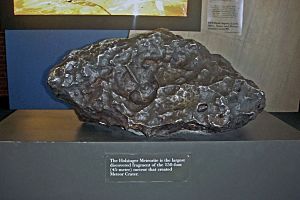 The Holsinger meteorite is the largest discovered fragment of the meteorite that created Meteor Crater and it is exhibited in the crater visitor center. 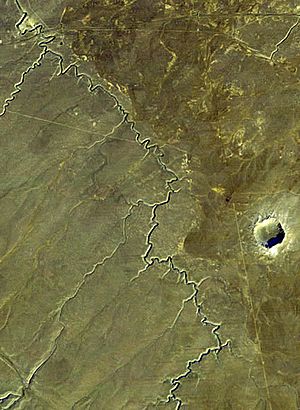 The Barringer Meteor Crater from space. The Diablo Canyon arroyo is to the west (left). The ghost town of Diablo Canyon, for which the meteorite is named, is on the canyon just to the north and out of the picture. 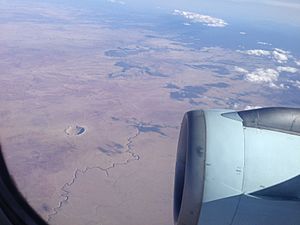 Meteor Crater is a meteorite impact crater approximately 37 miles (60 km) east of Flagstaff and 18 miles (29 km) west of Winslow in the northern Arizona desert of the United States. Because the United States Board on Geographic Names commonly recognizes names of natural features derived from the nearest post office, the feature acquired the name of "Meteor Crater" from the nearby post office named Meteor. The site was formerly known as the Canyon Diablo Crater and fragments of the meteorite are officially called the Canyon Diablo Meteorite. Scientists refer to the crater as Barringer Crater in honor of Daniel Barringer, who was first to suggest that it was produced by meteorite impact. The crater is privately owned by the Barringer family through their Barringer Crater Company, which proclaims it to be the "best preserved meteorite crater on Earth".

Despite its importance as a geological site, the crater is not protected as a national monument, a status that would require federal ownership. It was designated a National Natural Landmark in November 1967.

The crater was created about 50,000 years ago during the Pleistocene epoch, when the local climate on the Colorado Plateau was much cooler and damper. The area was an open grassland dotted with woodlands inhabited by woolly mammoths and giant ground sloths.

Since the crater's formation, the rim is thought to have lost 15–20 m (49–66 ft) of height at the rim crest due to natural erosion. Similarly, the basin of the crater is thought to have approximately 30 m (98 ft) of additional post-impact sedimentation from lake sediments and of alluvium. These erosion processes are the reason that very few remaining craters are visible on Earth, since many have been erased by these geological processes. The relatively young age of Meteor Crater, paired with the Arizona climate, have allowed this crater to remain almost unchanged since its formation. The lack of erosion that preserved the crater's shape helped lead to this crater being the first crater recognized as an official impact crater from a natural celestial body.

The object that excavated the crater was a nickel-iron meteorite about 50 meters (160 feet) across. The speed of the impact has been a subject of some debate. Modeling initially suggested that the meteorite struck at up to 20 kilometers per second (12 miles per second) but more recent research suggests the impact was substantially slower, at 12.8 kilometers per second (8.0 miles per second). It is believed that about half of the impactor's bulk was vaporized during its descent. Impact energy has been estimated at about 10 megatons. The meteorite was mostly vaporized upon impact, leaving little remains in the crater.

The crater came to the attention of scientists following its discovery by American settlers in the 19th century. Dubbed the Canyon Diablo crater – from Canyon Diablo, Arizona, the closest community to the crater in the late 19th century, 12 miles (19 km) north-west of the crater but now a ghost town – it had initially been ascribed to the actions of a volcano. This was not an unreasonable assumption, as the San Francisco volcanic field lies only about 40 miles (64 km) to the west. 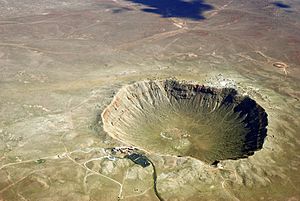 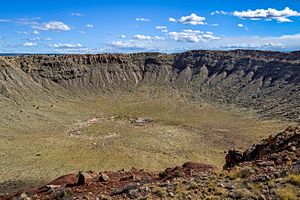 Looking into the crater from the north rim. The rust colored area on the far (south) rim is where the last mining for the meteorite occurred in 1929 and is believed to be the site of the bulk of the meteorite. Rock around the south rim is uplifted.

In 1891, the mineralogist Albert E. Foote presented the first scientific paper about the meteorites of Northern Arizona. Several years earlier, Foote had received an iron rock for analysis from a railroad executive. Foote immediately recognized the rock as a meteorite and led an expedition to search and retrieve additional meteorite samples. The team collected samples ranging from small fragments to over 600 pounds. Foote identified several minerals in the meteorites, including diamond, albeit of little commercial value. His paper to the Association for the Advancement of Science provided the first geological description of the crater to a scientific community.

In November 1891, Grove Karl Gilbert, chief geologist for the U.S. Geological Survey, investigated the crater and concluded that it was the result of a volcanic steam explosion. Gilbert had assumed that if it were an impact crater then the volume of the crater, as well as meteoritic material, should be present on the rim. Gilbert also assumed a large portion of the meteorite should be buried in the crater and that this would generate a large magnetic anomaly. Gilbert's calculations showed that the volume of the crater and the debris on the rim were roughly equivalent, so that the mass of the hypothetical impactor was missing, nor were there any magnetic anomalies. Gilbert argued that the meteorite fragments found on the rim were coincidental. Gilbert publicized his conclusions in a series of lectures. In 1892, Gilbert would be among the first to propose that the Moon's craters were caused by impact rather than volcanism.

In 1903, mining engineer and businessman Daniel M. Barringer suggested that the crater had been produced by the impact of a large iron-metallic meteorite. Barringer's company, the Standard Iron Company, staked a mining claim to the land and received a land patent signed by Theodore Roosevelt for 640 acres (2.6 km2) around the center of the crater in 1903. The claim was divided into four quadrants coming from the center clockwise from north-west named Venus, Mars, Jupiter and Saturn. In 1906, Roosevelt authorized the establishment of a newly named Meteor, Arizona, post office (the closest post office before was 30 miles (48 km) away in Winslow, Arizona).

Standard Iron Company conducted research on the crater's origins between 1903 and 1905. It concluded that the crater had indeed been caused by an impact. Barringer and his partner, the mathematician and physicist Benjamin Chew Tilghman, documented evidence for the impact theory in papers presented to the U.S. Geological Survey in 1906 and published in the Proceedings of the Academy of Natural Sciences in Philadelphia. 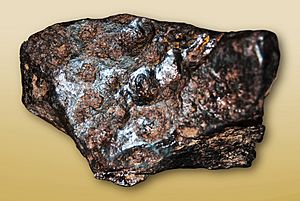 Fragment of the Cañon Diablo Meteorite

Barringer's arguments were met with skepticism, as there was a reluctance at the time to consider the role of meteorites in terrestrial geology. He persisted and sought to bolster his theory by locating the remains of the meteorite. At the time of discovery, the surrounding plains were covered with about 30 tons of large oxidized iron meteorite fragments. This led Barringer to believe that the bulk of the impactor could still be found under the crater floor. Impact physics was poorly understood at the time and Barringer was unaware that most of the meteorite vaporized on impact. He spent 27 years trying to locate a large deposit of meteoric iron, and drilled to a depth of 419 m (1,375 ft) but no significant deposit was ever found.

Barringer, who in 1894 was one of the investors who made $15 million in the Commonwealth silver mine in Pearce, Cochise County, Arizona, had ambitious plans for the iron ore. He estimated from the size of the crater that the meteorite had a mass of 100 million tons. The current estimate of 300,000 tons for the impactor is only three-tenths of one percent of Barringer's estimate. Iron ore of the type found at the crater was valued at the time at $125/ton, so Barringer was searching for a lode he believed to be worth more than a billion 1903 dollars.

Despite Barringer's findings and other excavations in the early 20th century, geologists' skepticism continued until the 1950s when planetary science gained in maturity and understanding of cratering processes increased. Professor Herman Leroy Fairchild, an early promoter of impact cratering, argued Barringer's case in an article in Science in 1930. 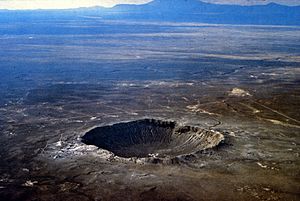 It was not until 1960 that later research by Eugene Merle Shoemaker confirmed Barringer's hypothesis. The key discovery was the presence in the crater of the minerals coesite and stishovite, rare forms of silica found only where quartz-bearing rocks have been severely shocked by an instantaneous overpressure. It cannot be created by volcanic action; the only known mechanisms of creating it is naturally through an impact event, or artificially through a nuclear explosion. Shoemaker was uniquely aware of this as he had been researching the shocked mineral formations that were formed after the nuclear detonation testing in the Nevada desert. Therefore, when similar minerals were seen at the Barringer Crater, he was certain that a similar kind of sudden shock compression was responsible for the crater, which effectively ruled out, the then more mainstream view, that the crater was the result of a comparatively less sudden volcanic eruption.

Shoemaker's deduction is considered the first definitive proof of an extraterrestrial impact on the Earth's surface. Since then, numerous impact craters have been identified around the world, though Meteor Crater remains one of the most visually impressive owing to its size, young age and lack of vegetative cover.

Furthermore, the nuclear detonation that created the Sedan crater, and other such craters from the era of atmospheric nuclear testing, were what geologists used to establish upper and lower limits on the potential energy of the meteor impactor.

The impact created an inverted stratigraphy, so that the layers immediately exterior to the rim are stacked in the reverse order to which they normally occur; the impact overturned and inverted the layers to a distance of one to two kilometers outward from the crater's edge. Specifically, climbing the rim of the crater from outside, one finds:

Panoramic from the lower viewing deck

Closeup of old mine shaft at the bottom of the crater. Note astronaut cutout and flag attached to fence (inset)          full size image

Meteor Crater is a popular tourist attraction privately owned by the Barringer family through the Barringer Crater Company, with an admission fee charged to see the crater. The Meteor Crater Visitor Center on the north rim features interactive exhibits and displays about meteorites and asteroids, space, the solar system and comets. It features the American Astronaut Wall of Fame and such artifacts on display as an Apollo boilerplate command module (BP-29), a 1,406 pound meteorite found in the area, and meteorite specimens from Meteor Crater that can be touched. Formerly known as the Museum of Astrogeology, the Visitor Center includes a movie theater, a gift shop, and observation areas with views inside the rim of the crater. Guided tours of the rim are offered daily. 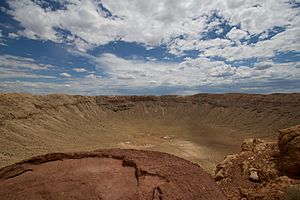 All content from Kiddle encyclopedia articles (including the article images and facts) can be freely used under Attribution-ShareAlike license, unless stated otherwise. Cite this article:
Meteor Crater Facts for Kids. Kiddle Encyclopedia.