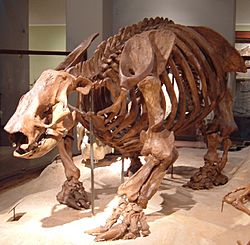 Paramylodon
University of Texas at Austin

Ground sloths are a group of extinct large sloths in the mammalian superorder Xenarthra. The much smaller living sloths are called "tree sloths".

The last surviving ground sloths lived in the Caribbean Antilles. Megalocnus may have survived until about the third century BC in Cuba. By then ground sloths had been extinct on the mainland of North and South America for 10,000 years or more. They survived on Caribbean islands because humans got to the islands much later. Some island sloth populations lived 5,000-6,000 years later than their continental mainland relatives. This fits the pattern of Holocene extinction of large vertebrates due to human dispersal. In other words, they were probably hunted or otherwise so affected by humans that they were unable to survive.

Most ground sloth evolution took place during the mid to late Tertiary of South America while the continent was isolated. At their earliest appearance in the fossil record, the ground sloths were already quite distinct. The presence of islands between the American continents in the Miocene allowed some to get into North America.

Ground sloths were a hardy group: their numbers and dispersals into remote areas are evidence of this. Remains have been found in parts of Alaska.

All content from Kiddle encyclopedia articles (including the article images and facts) can be freely used under Attribution-ShareAlike license, unless stated otherwise. Cite this article:
Ground sloth Facts for Kids. Kiddle Encyclopedia.