Sloths are Xenarthran mammals from Central and South America. They are part of the order Pilosa. There are two families of sloths: two-toed sloth and three-toed sloth. Most scientists call these two families the Folivora, while some call them the Phyllophaga.

The biogeographic origins of the Pilosa is still unclear, but they can be traced back in South America as far as the early Tertiary, about 60 million years ago. The presence of these animals in Central America is explained by the Great American Interchange.

Most sloths are about the size of a small dog and they have short, flat heads. Their hair is grayish brown but, at times they look grey-green in color because they move so slowly that tiny camouflaging algae grow all over their coats. They have hooklike claws on their arms and legs to keep them attached to trees.

Sloths are active at night and sleep curled up with their head placed between the arms and the feet drawn close together, or hanging upsidedown with the help of their hook-like claws. This disguises them as part of a tree so that its enemies like the jaguar do not see them.

Sloths rarely climb down from the trees, and when they are on the ground they can only crawl awkwardly. However, when there is a forest flood, they are very good swimmers. 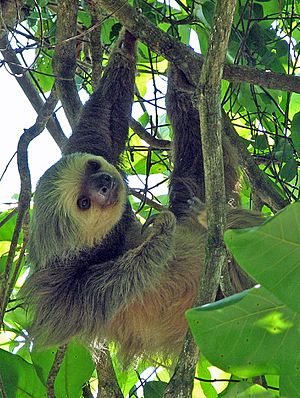 Baby sloths learn what to eat by licking the lips of their mother. All sloths eat the leaves of the cecropia.

Two-toed sloths have a diverse diet of insects, carrion, fruits, leaves and small lizards, ranging over up to 140 hectares. Three-toed sloths, on the other hand, have a limited diet of leaves from only a few trees, and no mammal digests as slowly.

They have made adaptations to arboreal browsing. Leaves, their main food source, provide very little energy or nutrients, and do not digest easily, so sloths have large, slow-acting stomachs with multiple compartments in which symbiotic bacteria break down the tough leaves. As much as two-thirds of a well-fed sloth's body weight consists of the contents of its stomach, and the digestive process can take a month or more to complete.

Three-toed sloths go to the ground to urinate and defecate about once a week, digging a hole and covering it afterwards. They go to the same spot each time and are vulnerable to predation while doing so. This behaviour may be related to maintaining the ecosystem in the sloths' fur. Individual sloths tend to spend the bulk of their time feeding on a single "modal" tree; by burying their excreta near the trunk of that tree, they may help nourish it. Recent research shows that moths, which live in the sloth's fur, lay eggs in the sloth's feces. When they hatch, the larvae feed on the feces, and when mature fly up onto the sloth above.

Pale- and brown-throated species mate seasonally, while the maned sloth breeds at any time of year. The reproduction of pygmy three-toed sloths is unknown. Litters are of one newborn only, after six months' gestation for three-toed, and 12 months' for two-toed. Newborns stay with their mother for about five months. In some cases, young sloths die from a fall indirectly because the mothers prove unwilling to leave the safety of the trees to retrieve the young. Females normally bear one baby every year, but sometimes sloths' low level of movement actually keeps females from finding males for longer than one year. Sloths are not particularly sexually dimorphic and several zoos have received sloths of the wrong sex.

The average lifespan of two-toed sloths in the wild is currently unknown due to a lack of full-lifespan studies in a natural environment. Median life expectancy in human care is about 16 years, with one individual at the Smithsonian Institution's National Zoo reaching an age of 49 years before her death. 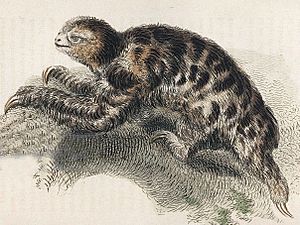 1825 illustration of a Pygmy three-toed sloth by Thomas Landseer

Although habitat is limited to the tropical rainforests of South and Central America, in that environment sloths are successful. On Barro Colorado Island in Panama, sloths have been estimated to comprise 70% of the biomass of arboreal mammals. Four of the six living species are presently rated "least concern"; the maned three-toed sloth, which inhabits Brazil's dwindling Atlantic Forest, is classified as "vulnerable", while the island-dwelling pygmy three-toed sloth is critically endangered. Sloth's lower metabolism confines them to the tropics and they adopt thermoregulation behaviors of cold-blooded animals like sunning themselves.

All content from Kiddle encyclopedia articles (including the article images and facts) can be freely used under Attribution-ShareAlike license, unless stated otherwise. Cite this article:
Sloth Facts for Kids. Kiddle Encyclopedia.