Megatherium was a huge, bulky, slow-moving mammal that lived during the Pleistocene epoch in South America. It went extinct about 11,000 years ago. This ice-age mammal was the largest of the ground sloths; Megatherium's name means "great beast." Megatherium was named by paleontologist Richard Owen in 1856; the first Megatherium fossil was found in Brazil in 1789. 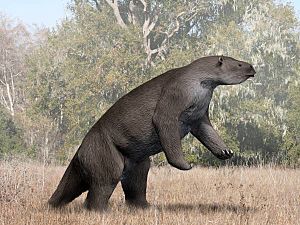 The subgenus and species Megatherium (Pseudomegatherium) tarijense appears to be a junior synonym of M. americanum, and merely a small individual. The ground sloths, as with all other xenarthrans, evolved in isolation in South America, while it was an island continent during the Paleogene.

During the Pliocene, the Central American Isthmus formed, causing the Great American Interchange, and a mass extinction of much of the indigenous South American megafauna. Ground sloths were largely unaffected and continued to thrive in spite of competition from the northern immigrants. Ground sloths were among the various South American animal groups to migrate northwards into North America, where they remained and flourished until the late Pleistocene.

The rhinoceros-sized Promegatherium of the Miocene is suggested as the ancestor of Megatherium. The oldest (and smallest) species of Megatherium is M. altiplanicum of Pliocene Bolivia. It was very similar to Promegatherium, and was also about the size of a rhinoceros. M. tarijense has been regarded as a medium-sized Megatherium species, larger than M. altiplanicum, but smaller than M. americanum. It roamed from the Tarija Basin in Bolivia to Yantac in Peru. Species of Megatherium became larger over time, with the largest species, M. americanum of the Late Pleistocene, reaching the size of an African elephant. 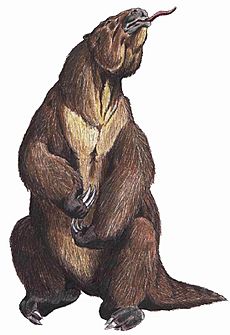 Megatherium is one of the largest land mammals known to have existed, weighing up to 4 tonnes and measuring up to 6 m (20 ft) in length from head to tail. It is the largest-known ground sloth, as big as modern elephants, and would have only been exceeded in its time by a few species of mammoth. The group is known primarily from its largest species, M. americanum. Megatherium species were members of the abundant Pleistocene megafauna, large mammals that lived during the Pleistocene epoch.

It had a robust skeleton with a large pelvic girdle and a broad muscular tail. Its large size enabled it to feed at heights unreachable by other contemporary herbivores. Rising on its powerful hind legs and using its tail to form a tripod, Megatherium could support its massive body weight while using the curved claws on its long forelegs to pull down branches with the choicest leaves. This sloth, like a modern anteater, walked on the sides of its feet because its claws prevented it from putting them flat on the ground. Although it was primarily a quadruped, its trackways show that it was capable of bipedal locomotion. Biomechanical analysis also suggests it had adaptations to bipedalism.

Megatherium had a narrow, cone-shaped mouth and prehensile lips that were probably used to select particular plants and fruits. While some evidence suggests the animal could use its tongue to differentiate and select its foliage, the lips probably had a more important role in this. Some of the elements in the oral cavity of Megatherium were fused together: a rigidly articulated stylohyal and epihyal, and the apparatus lies farther anteriorly, which together with the elongated, steeply inclined mandibular symphysis, indicates a relatively shorter geniohyoid muscle and thus more limited capacity for tongue protrusion. It was well adapted for strong, predominantly orthal (up-down) movement for eating rough vegetation. Megatherium possessed the narrowest muzzle of all ground sloths from the Pleistocene. This leads paleobiologists to believe that it was a very selective eater. It had the ability to pick and choose which leaves and twigs it would consume. Megatherium had a large narrow prehensile lip that was capable of grabbing and tearing off particular leaves and twigs and other sorts of vegetation.

Megatherium inhabited woodland and grassland environments of the lightly wooded areas of South America where it was an endemic species, as recently as 10,000 years ago. Megatherium was adapted to temperate, arid or semiarid open habitats. An example of these most recent finds is at Cueva del Milodón in Patagonian Chile. The closely related genus Eremotherium (that has been classified occasionally as part of Megatherium) lived in more tropical environments further north, and invaded temperate North America as part of the Great American Interchange. 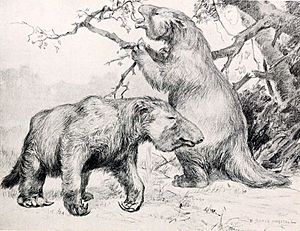 The giant ground sloth lived mostly in groups, but it may have lived singly in caves. It probably had mainly a browsing diet in open habitats, but also it probably fed on other moderate to soft tough food. For millions of years, the sloth did not have many enemies to bother it, so it was probably a diurnal animal.

The giant ground sloth was a herbivore, feeding on leaves such as yuccas, agaves and grasses. While it fed chiefly on terrestrial plants, it could also stand on its hind legs, using its tail as a balancing tripod, and reach for upper growth vegetation. It would pull itself upright to sit on its haunches or to stand and then tugged at plants with its feet, digging them up with the five sharp claws on each foot. The sloth used its simple teeth to grind down food before swallowing it, and its highly developed cheek muscles helped in this process. The sloth's stomach was able to digest coarse and fibrous food. It is likely that it spent a lot of time resting to aid digestion. 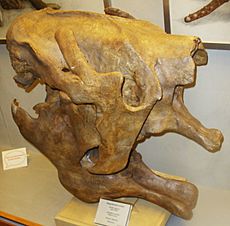 A recent morpho-functional analysis indicates that M. americanum was adapted for strong vertical biting. The teeth are hypsodont and bilophodont, and the sagittal section of each loph is triangular with a sharp edge. This suggests that the teeth were used for cutting, rather than grinding, and that hard fibrous food was not the primary dietary component.

While it has been suggested that the giant sloth may have been partly carnivorous, this is a controversial claim. Richard Fariña and Ernesto Blanco of the Universidad de la República in Montevideo have analysed a fossil skeleton of M. americanum and discovered that its olecranon—the part of the elbow to which the triceps muscle attaches—was very short. This adaptation is found in carnivores and optimises speed rather than strength. The researchers say this would have enabled M. americanum to use its claws like daggers. They suggest that to add nutrients to its diet, Megatherium may have taken over the kills of Smilodon. Based on the estimated strength and mechanical advantage of its biceps, it has been proposed that Megatherium could have overturned adult glyptodonts (large, armored xenarthrans, related to armadillos) as a means of scavenging or hunting these animals. However, noting that sloths lack the carnassials typical of predators and that traces of bone are absent from the many preserved deposits of sloth dung, Paul Martin has described this proposal as "fanciful".

In the south, the giant ground sloth flourished until about 10,500 radiocarbon years BP (8,500 BCE). Most cite the appearance of an expanding population of human hunters as the cause of its extinction. There are a few late dates of around 8,000 BP and one of 7,000 BP for Megatherium remains, but the most recent date viewed as credible is about 10,000 BP. The use of bioclimatic envelope modeling indicates that the area of suitable habitat for Megatherium had shrunk and become fragmented by the mid-Holocene. While this alone would not likely have caused its extinction, it has been cited as a possible contributing factor.

All content from Kiddle encyclopedia articles (including the article images and facts) can be freely used under Attribution-ShareAlike license, unless stated otherwise. Cite this article:
Megatherium Facts for Kids. Kiddle Encyclopedia.