Agaves are a type of succulent plant from Mexico and the southwestern parts of the United States. They have thick, sharp leaves. Agave plants flower only once, produce seeds and then die. Before flowering they usually live for 10 to 25 years.

They were an important food for many indigenous people in the southwestern United States, such as the Navajo and the Hokoham. 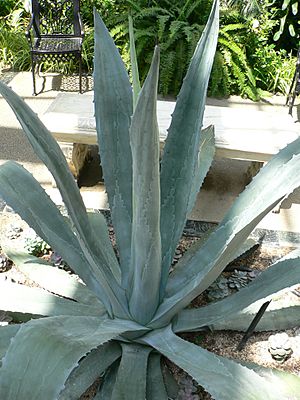 Agaves are succulents with a large rosette of thick, fleshy leaves, with most species ending in a sharp terminal spine. The stem is usually short, the leaves apparently springing from the root.

Along with plants from the related genus Yucca, various Agave species are popular ornamental plants in hot, dry climates, as they require very little water to survive. 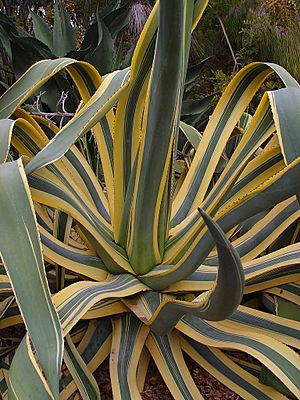 It is a common misconception that agave's are cacti. They are not related to cacti, nor are they closely related to Aloe whose leaves are similar in appearance.

Agave species are used as food plants by the larvae of some Lepidoptera (butterfly and moth) species, including Batrachedra striolata. 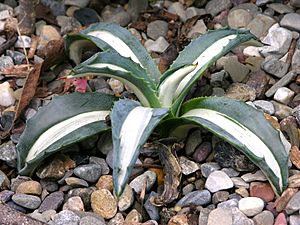 Each agave plant produces several pounds of edible flowers during its final season. The stalks, which are ready during the summer, before the blossom, weigh several pounds each. Roasted, they are sweet and can be chewed to extract the aguamiel, like sugarcane. When dried out, the stalks can be used to make didgeridoos.

The leaves may be collected in winter and spring, when the plants are rich in sap, for eating. The leaves of several species also yield fiber, for instance, Agave sisalana, the sisal hemp, and Agave decipiens, the false sisal hemp. Agave Americana is the source of pita fiber, and is used as a fiber plant in Mexico, the West Indies, and southern Europe. 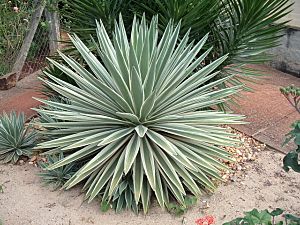 The agave, especially Agave murpheyi, was a major food source for the prehistoric indigenous people of the Southwestern United States. The Hohokam of southern Arizona cultivated large areas of agave. 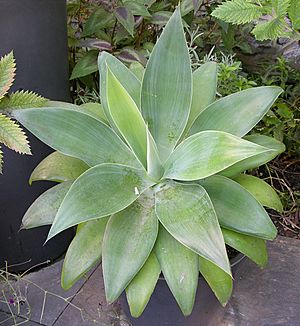 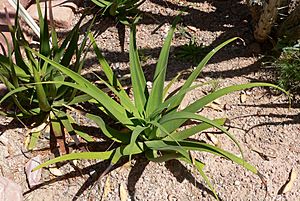 The Navajo similarly found many uses for the agave plant. A beverage is squeezed from the baked fibers, and the heads can be baked or boiled, pounded into flat sheets, sun dried, and stored for future use. The baked, dried heads are also boiled and made into an edible paste, eaten whole, or made into soup. The leaves are eaten boiled, and the young, tender flowering stalks and shoots are roasted and eaten as well. The fibers are used to make rope, the leaves are used to line baking pits, and the sharp-pointed leaf tips are used to make basketry awls.

During the development of the inflorescence, sap rushes to the base of the young flower stalk. Agave nectar (also called agave syrup), a sweetener derived from the sap, is used as an alternative to sugar in cooking, and can be added to breakfast cereals as a binding agent.

The agave sweetener is marketed as natural and diabetic-friendly, without spiking blood sugar levels. However, extracts from agave leaves are under preliminary research for their potential use as food additives.

The sap of A. americana and other species is used in Mexico and Mesoamerica to produce pulque, an alcoholic beverage. The flower shoot is cut out and the sap collected and subsequently fermented. By distillation, a spirit called mezcal is prepared; one of the best-known forms of mezcal is tequila.

Agave can be used as the raw material for industrial production of fructans as a prebiotic dietary fiber.

Resulting from its natural habitat in stressful environments, agave is under preliminary research for its potential use in germplasm conservation and in biotechnology to better anticipate the economic effects of global climate change. It may also have use as a bioethanol or bioenergy feedstock.

All content from Kiddle encyclopedia articles (including the article images and facts) can be freely used under Attribution-ShareAlike license, unless stated otherwise. Cite this article:
Agave Facts for Kids. Kiddle Encyclopedia.