The didgeridoo (sometimes didjeridu) is an Australian Aboriginal wind musical instrument. They were used by the Yolgnu people of Arnhem Land. They can be quite long, anywhere from 1 to 3 m (3 to 10 ft) long. Most are around 1.2 m (4 ft) long. The longer the instrument, the lower the pitch or key of the instrument. They are a hollow wooden tube, which can be either cylindrical or conical in shape. It is best described as being a wooden trumpet or drone. Musicologists say it is a brass aerophone.

It is difficult to know when didgeridoos were first used. Studies of rock art in Arnhem Land show that it has been in use for more than 1,500 years. A rock painting in Ginga Wardelirrhmeng, on the northern edge of the Arnhem Land plateau, dates from the freshwater period. It shows a didgeridoo player and two singers playing in a ceremony.

"Didgeridoo" is said to be a word invented in the West, not an Aboriginal word. It may come from the Irish words dúdaire or dúidire. This means 'trumpeter; constant smoker, puffer; long-necked person, eavesdropper; hummer, crooner' and dubh, meaning "black" (or duth, meaning "native"). However, this theory is not widely accepted.

The earliest examples of the word in print was in a 1919 issue of Smith's Weekly where it was called an "infernal didjerry" which "produced but one sound - (which sounded like) didjerry, didjerry, didjerry and so on". It was also used the 1919 Australian National Dictionary, The Bulletin in 1924 and the writings of Herbert Basedow in 1926. There are more than 45 names for this instrument among the Aboriginal people of northern Australia including Yirdaki. Yirdaki, also sometimes spelt yidaki, is for the instrument made and used by the Yolngu people of north-east Arnhem Land. 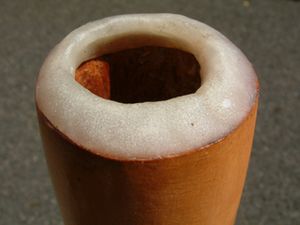 Aboriginal didgeridoos are made in the traditional communities in Northern Australia or by makers who travel to Central and Northern Australia to get the materials. They are usually made from hardwoods, usually eucalyptus species that are native to the area. Sometimes a native bamboo, such as Bambusa arnhemica, or pandanus is used. The main trunk of the tree is used, though a big branch may be used instead. Aboriginal makers spend a lot of time looking for a tree that has been hollowed out by termites. If the hollow is too big or too small, it will make a poor quality instrument.

When a tree is found and cut down, the part of trunk or branch that will be made into a didgeridoo is cut out. The bark is taken off, the ends are trimmed, and there is some shaping of the outside. It may be painted or left natural. A rim of beeswax may be put on to the mouthpiece end. Traditional instruments made by Aboriginals in Arnhem Land are sometimes fitted with a 'sugarbag' mouthpiece. This is black beeswax from wild bees and has a its own special smell.

Didgeridoos can also be made from PVC pipes, non-native hard woods (which are split, hollowed and rejoined), fiberglass, metal, agave, clay, hemp (a bioplastic named zelfo), and even carbon fiber. These didgeridoos usually have an upper inside diameter of around 1.25" down to a bell end of anywhere between two to eight inches and have a length made to the needed key. The mouthpiece can be made of beeswax, hardwood or simply sanded and sized by the craftsman. In PVC, rubber stopper with a hole cut into it can be used.

Modern didgeridoo designs are different from the traditional Australian Aboriginal didgeridoo. They are recognized as being a separate instrument. Didgeridoo design changes started in the late 20th century using new materials and different shapes. 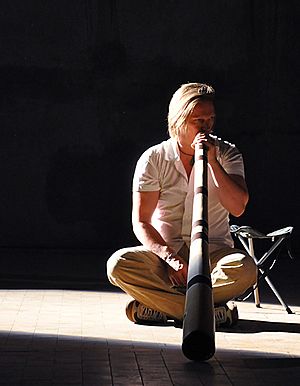 A didgeridoo is usually played sitting down because they are so long. It is played with continuously vibrating lips to make the drone while using a special way of breathing called circular breathing. This means a player breathes in through the nose at the same time as pushing air out of the mouth. A skilled player can refill the air in their lungs. With practice, the player can keep a note playing for as long as desired. There are recordings of modern didgeridoo players playing without stopping for more than 40 minutes; Mark Atkins on Didgeridoo Concerto (1994) plays for over 50 minutes continuously.

The rhythm of the circular breathing, gives the instrument its readily recognizable sound. Other changes in the didgeridoo's sound can be made by adding vocal sounds to the drone. Most of the sounds are related to the sounds of Australian animals, such as the dingo or the kookaburra. To make these sounds, the players simply have to use their voice to make the sounds of the animals whilst continuing to blow air through the instrument. The results range from very high-pitched sounds to very low sounds. Adding vocal sounds increases the complexity of the playing.

Anthony Baines wrote that the didgeridoo is like "...an aural kaleidoscope of timbres". He also said that the virtuoso skills used by the best performers were unlike those needed on any other instrument.

Use of the didgeridoo

Pair sticks, sometimes called clapsticks or bilma, set the beat for the songs during ceremonies. The rhythm of the didgeridoo and the beat of the clapsticks use patterns that have been handed down for many generations. Traditionally, only men play the didgeridoo and sing during ceremonies, but both men and women may dance. There were female didgeridoo players, but they did not play in ceremonies and it was not encouraged. Linda Barwick, an ethnomusicologist, says that traditionally women have not played the didgeridoo in ceremony, but in informal situations there is no prohibition in the Dreaming Law. On September 3, 2008, the publisher Harper Collins issued a public apology for its book "The Daring Book for Girls", scheduled to be published in October, which openly encouraged girls to play the instrument. 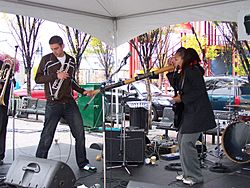 A didgeridoo being played by Tristin Chanel

The didgeridoo is now often used as an instrument in the experimental and avant-garde music scene. Industrial music bands like Test Department- used sounds from this instrument in their performances, linking ecology to industry, influenced by ethnic music and culture.

It has also been an instrument used for the fusion of tribal rhythms with a black metal sound. A music project called Naakhum used the paganism of the Australian tribes and many others as an approach.

Most didgeridoos made today are for souvenir purposes. It is common to find didgeridoos made of non-native timbers, decorated incorrectly by non-indigenous artists with colourful designs or copied dot patterns. These decorations do not use traditional dreamtime stories or designs. These didgeridoos also often vary widely in size and shape, many being thinner and straighter. As a result of the inadequate wood types, shapes and lengths, souvenir didgeridoos can rarely be used as musical instruments.

Decoration of souvenir didgeridoos is often seen by Aboriginal communities as offensive, inappropriate, inadequate, inaccurate and in many cases, misleading. The copying of traditional artwork is also used to sell these didgeridoos to unsuspecting tourists.

A 2005 study in the British Medical Journal found that learning and playing the didgeridoo helped reduce snoring and sleep apnea. It does this by making muscles in the upper airway stronger, and this helps them stay open during sleep. This strengthening happens after the player has learned the circular breathing technique.

All content from Kiddle encyclopedia articles (including the article images and facts) can be freely used under Attribution-ShareAlike license, unless stated otherwise. Cite this article:
Didgeridoo Facts for Kids. Kiddle Encyclopedia.