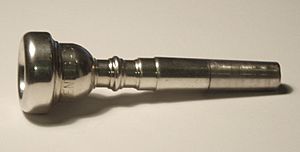 Different parts of a brass mouthpiece

A mouthpiece has many different parts, and all its parts have different names.

Some very small changes in how a mouthpiece is made can change the sound of an instrument a lot.

Substances that mouthpieces for brass instruments can be made out of

Some players gold plate their brass mouthpieces, or cover them with a thin layer of gold. This makes the sound of the instrument better than with any other mouthpiece. For some people that are allergic to silver, this is the best (but not cheapest) way to play a brass instrument without getting sick. Gold does not smudge, so it only has to be cleaned with soap and water once in a while.

Silver plating is almost always used on brass mouthpieces because it does not cost too much money and a silver-plated mouthpiece helps a player make a pretty good sound. Silver plating is not as expensive as gold, but it is sometimes very important to have if a player plays a certain way. Silver-plate gives a clearer sound than gold and is good for styles of playing that need a lot of volume. Also, silver needs to be cleaned more often because it smudges easily.

Two of the newest things mouthpieces can be made out of are stainless steel and titanium. They are very rare, and are only made by a few companies. Steel and titanium mouthpieces do not vibrate as much, so they make a very clear sound, require much less cleaning, and they do not need to be silver plated. However, they are much more expensive than mouthpieces that are silver or gold plated.

All content from Kiddle encyclopedia articles (including the article images and facts) can be freely used under Attribution-ShareAlike license, unless stated otherwise. Cite this article:
Mouthpiece (brass) Facts for Kids. Kiddle Encyclopedia.