The Arnhem Land Region is one of the five regions of the Northern Territory of Australia. It is in the north east corner of the territory and is about 500km from the territory capital Darwin. It has an area of 97,000 km². This area includes Kakadu National Park. About 16,230 people live in Arnhem Land. It was named by Matthew Flinders after the Dutch ship Arnhem, which explored the coast in 1623. 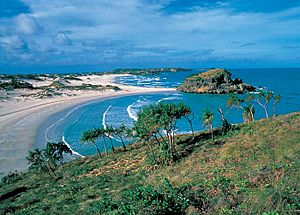 Arnhem Land goes from Port Roper on the Gulf of Carpentaria around the coast to the East Alligator River where it joins Kakadu National Park. The major towns are Jabiru on the Kakadu National Park border, Maningrida on the Liverpool River mouth, and Nhulunbuy (also known as Gove) in the far north east, on the Gove Peninsula. Gove is the site of large bauxite mine with an alumina refinery. Its administrative centre is the town of Nhulunbuy, the fourth largest town in the Northern Territory.

The climate of Arnhem Land is tropical monsoon with a wet and dry season. Temperatures do not vary much during the year. It can get as cold as 15 degrees Celsius during nights in the dry season (April to September). In the wet season (October to March) the days can be as hot as 33 degrees Celsius. 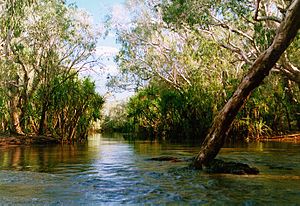 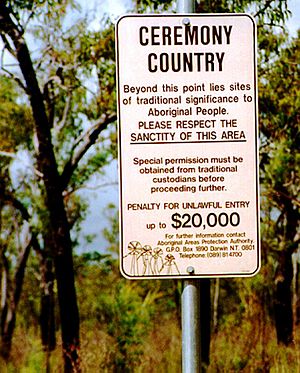 Some cultural areas off-limits to visitors

Arnhem Land became an Aboriginal Reserve in 1931. It is still one of the largest Aboriginal Reserves in Australia. It is best known for its remoteness, its art, and the strong continuing traditions of its people. North east Arnhem Land is home to the Yolngu people, one of the largest indigenous groups in Australia. They have been able to keep their traditional indigenous culture. The Malays and Macassans are believed to have had contact with the coastal Aboriginal groups and traded with them prior to European settlement of Australia.

The 2006 movie Ten Canoes shows life in Arnhem land with a story that uses old Aboriginal stories. It was co-directed by one of the cast members. The movie and also the movie about how it was made, The Balano and the Bark Canoes, shows the great struggle the indigenous people have made to keep their culture alive.

The Aboriginal town of Yirrkala, just outside Nhulunbuy, is famous throughout the world. This is because of its bark paintings, and its role in supporting the rights of Indigenous Australians. It is also the place where the Yidaki, or Didgeridoo, came from. The town of Gunbalanya, once called Oenpelli, in Western Arnhem Land is also famous for its bark painting.

Arnhem Land is famous for its Aboriginal rock art. Some of the best art can be found at Ubirr Rock, Injalak Hill, and in the Canon Hill area. Some of these show early visits by Europeans, sometimes in such detail that Martini-Henry rifles can be identified. Other paintings show axes, aircraft and ships. In one rock shelter, hundreds of kilometres from Darwin, there is a painting the wharf at Darwin. It shows buildings and boats, the Europeans with their hats and pipes. Some are shown without hands, which they have in their pockets. There is a painting, near the East Alligator River crossing, which shows a man with a gun and long pigtails down his back. This would be one of the Chinese workers brought to Darwin in the late 19th century. The people also make ritual sand sculptures which do not last.

One Yolngu stone arrangement, at Maccasans Beach near Yirrkala, shows the layout of the Macassan praus (ships) used for Trepang fishing. The Yolngu traded with the people of Makassar on the Indonesian island of Sulawesi. This trading was happening 200 years before European settlement.

All content from Kiddle encyclopedia articles (including the article images and facts) can be freely used under Attribution-ShareAlike license, unless stated otherwise. Cite this article:
Arnhem Land Facts for Kids. Kiddle Encyclopedia.