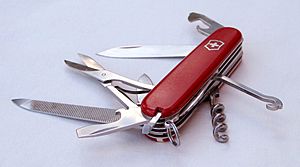 The handles of the Victorinox Swiss Army knives are made of PVC. 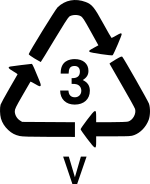 PVC SPI code, for recycling (Society of the Plastics Industry). The Unicode character for this symbol is U+2675

PVC comes in two basic forms: rigid (sometimes abbreviated as RPVC) and flexible. The rigid form of PVC is used in construction for pipe and in profile applications such as doors and windows. It is also used in making bottles, non-food packaging, food-covering sheets, and cards (such as bank or membership cards). It can be made softer and more flexible by the addition of plasticizers, the most widely used being phthalates. In this form, it is also used in plumbing, electrical cable insulation, imitation leather, flooring, signage, phonograph records, inflatable products, and many applications where it replaces rubber. With cotton or linen, it is used to make canvas.

Pure polyvinyl chloride is a white, brittle solid. It is insoluble in alcohol but slightly soluble in tetrahydrofuran.

PVC was accidentally synthesized in 1872 by German chemist Eugen Baumann. The polymer appeared as a white solid inside a flask of vinyl chloride that had been left exposed to sunlight. In the early 20th century the Russian chemist Ivan Ostromislensky and Fritz Klatte of the German chemical company Griesheim-Elektron both attempted to use PVC in commercial products, but difficulties in processing the rigid, sometimes brittle polymer thwarted their efforts. Waldo Semon and the B.F. Goodrich Company developed a method in 1926 to plasticize PVC by blending it with various additives. The result was a more flexible and more easily processed material that soon achieved widespread commercial use. 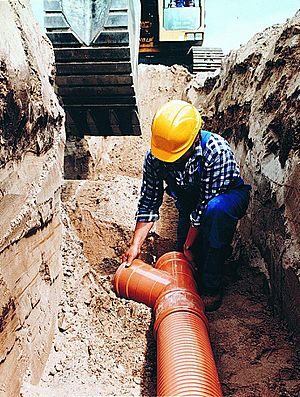 PVC is used extensively in sewage pipes due to its low cost, chemical resistance and ease of jointing

Roughly half of the world's polyvinyl chloride resin manufactured annually is used for producing pipes for municipal and industrial applications. In the water distribution market, it accounts for 66% of the market in the U.S., and in sanitary sewer pipe applications, it accounts for 75%. Buried PVC pipes in both water and sanitary sewer applications that are 4 inches (100 mm) in diameter and larger are typically joined by means of a gasket-sealed joint. The most common type of gasket utilized in North America is a metal reinforced elastomer, commonly referred to as a Rieber sealing system. Its light weight, low cost, and low maintenance make it attractive. However, it must be carefully installed and bedded to ensure longitudinal cracking and overbelling does not occur. Additionally, PVC pipes can be fused together using various solvent cements, or heat-fused (butt-fusion process, similar to joining high-density polyethylene (HDPE) pipe), creating permanent joints that are virtually impervious to leakage.

In February 2007 the California Building Standards Code was updated to approve the use of chlorinated polyvinyl chloride (CPVC) pipe for use in residential water supply piping systems. CPVC has been a nationally accepted material in the U.S. since 1982; California, however, has permitted only limited use since 2001. The Department of Housing and Community Development prepared and certified an environmental impact statement resulting in a recommendation that the commission adopt and approve the use of CPVC. The commission's vote was unanimous, and CPVC has been placed in the 2007 California Plumbing Code.

PVC is commonly used as the insulation on electrical cables such as teck; PVC used for this purpose needs to be plasticized. Flexible PVC coated wire and cable for electrical use has traditionally been stabilised with lead, but these are being replaced with calcium-zinc based systems.

In a fire, PVC-coated wires can form hydrogen chloride fumes; the chlorine serves to scavenge free radicals and is the source of the material's fire retardance. While hydrogen chloride fumes can also pose a health hazard in their own right, it dissolves in moisture and breaks down onto surfaces, particularly in areas where the air is cool enough to breathe, and is not available for inhalation. Frequently in applications where smoke is a major hazard (notably in tunnels and communal areas), PVC-free cable insulation is preferred, such as low smoke zero halogen (LSZH) insulation. 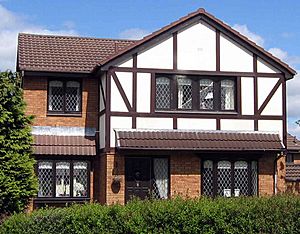 PVC is a common, strong but lightweight plastic used in construction. It is made softer and more flexible by the addition of plasticizers. If no plasticizers are added, it is known as uPVC (unplasticized polyvinyl chloride) or rigid PVC.

uPVC is extensively used in the building industry as a low-maintenance material, particularly in Ireland, the United Kingdom, in the United States and Canada. In the U.S. and Canada it is known as vinyl or vinyl siding. The material comes in a range of colors and finishes, including a photo-effect wood finish, and is used as a substitute for painted wood, mostly for window frames and sills when installing insulated glazing in new buildings; or to replace older single-glazed windows, as it does not decompose and is weather-resistant. Other uses include fascia, and siding or weatherboarding. This material has almost entirely replaced the use of cast iron for plumbing and drainage, being used for waste pipes, drainpipes, gutters and downspouts. uPVC is known as having strong resistance against chemicals, sunlight, and oxidation from water. 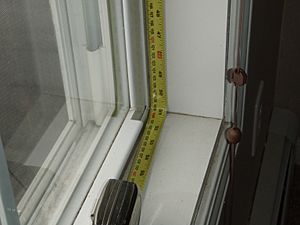 Polyvinyl chloride is formed in flat sheets in a variety of thicknesses and colors. As flat sheets, PVC is often expanded to create voids in the interior of the material, providing additional thickness without additional weight and minimal extra cost. Sheets are cut using saws and rotary cutting equipment. Plasticized PVC is also used to produce thin, colored, or clear, adhesive-backed films referred to simply as vinyl. These films are typically cut on a computer-controlled plotter (see Vinyl cutter) or printed in a wide-format printer. These sheets and films are used to produce a wide variety of commercial signage products, including car body stripes and stickers. 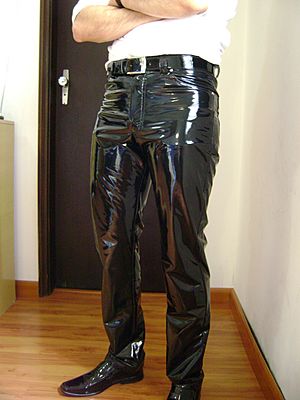 PVC fabric has a niche role in specialty clothing, to either create a artificial leather material or at times simply for its effect. PVC clothing is common in Goth, Punk and alternative fashions. PVC is less expensive than rubber, leather, and latex which it is used to simulate.

The two main application areas for single-use medically approved PVC compounds are flexible containers and tubing: containers used for blood and blood components, for urine collection or for ostomy products and tubing used for blood taking and blood giving sets, catheters, heart-lung bypass sets, hemodialysis sets etc. In Europe the consumption of PVC for medical devices is approximately 85,000 tons each year. Almost one third of plastic-based medical devices are made from PVC. The reasons for using flexible PVC in these applications for over 50 years are numerous and based on cost effectiveness linked to transparency, light weight, softness, tear strength, kink resistance, suitability for sterilization and biocompatibility.

Flexible PVC flooring is inexpensive and used in a variety of buildings, including homes, hospitals, offices, and schools. Complex and 3D designs are possible, which are then protected by a clear wear layer. A middle vinyl foam layer also gives a comfortable and safe feel. The smooth, tough surface of the upper wear layer prevents the buildup of dirt, which prevents microbes from breeding in areas that need to be kept sterile, such as hospitals and clinics.

PVC may be extruded under pressure to encase wire rope and aircraft cable used for general purpose applications. PVC coated wire rope is easier to handle, resists corrosion and abrasion, and may be color-coded for increased visibility. It is found in a variety of industries and environments both indoor and out.

PVC has been used for a host of consumer products. One of its earliest mass-market consumer applications was vinyl record production. More recent examples include wallcovering, greenhouses, home playgrounds, foam and other toys, custom truck toppers (tarpaulins), ceiling tiles and other kinds of interior cladding.

PVC piping is cheaper than metals used in musical instrument making; it is therefore a common alternative when making instruments, often for leisure or for rarer instruments such as the contrabass flute.

All content from Kiddle encyclopedia articles (including the article images and facts) can be freely used under Attribution-ShareAlike license, unless stated otherwise. Cite this article:
Polyvinyl chloride Facts for Kids. Kiddle Encyclopedia.