Polypropylene (PP), or polypropene, is a type of plastic. It is a thermoplastic polymer which can be made into a fibre for yarn and fabric, film for packaging, or many other shapes.

As a plastic it can be made translucent but usually is opaque and often brightly colored. It is tough, and resists many solvents, acids and bases.

It can be formed into a thin thread and woven into a strong strap, often used on backpacks and bags and in clothing.

Polypropylene is the second-most widely produced commodity plastic (after polyethylene). In 2019, the global market for polypropylene was worth $126.03 billion. Revenues are expected to exceed US$145 billion by 2019. The sales of this material are forecast to grow at a rate of 5.8% per year until 2021. 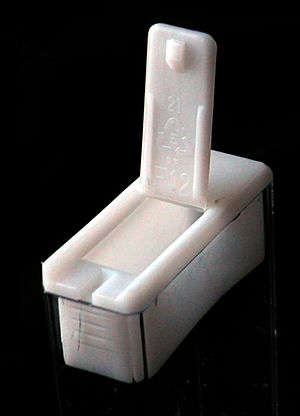 Polypropylene lid of a Tic Tac box, with a living hinge and the resin identification code under its flap

As polypropylene is resistant to fatigue, most plastic living hinges, such as those on flip-top bottles, are made from this material. However, it is important to ensure that chain molecules are oriented across the hinge to maximise strength.

Polypropylene is used in the manufacturing of piping systems, both ones concerned with high purity and ones designed for strength and rigidity (e.g., those intended for use in potable plumbing, hydronic heating and cooling, and reclaimed water). This material is often chosen for its resistance to corrosion and chemical leaching, its resilience against most forms of physical damage, including impact and freezing, its environmental benefits, and its ability to be joined by heat fusion rather than gluing. 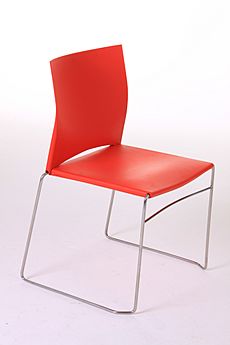 Many plastic items for medical or laboratory use can be made from polypropylene because it can withstand the heat in an autoclave. Its heat resistance also enables it to be used as the manufacturing material of consumer-grade kettles. Food containers made from it will not melt in the dishwasher, and do not melt during industrial hot filling processes. For this reason, most plastic tubs for dairy products are polypropylene sealed with aluminum foil (both heat-resistant materials). After the product has cooled, the tubs are often given lids made of a less heat-resistant material, such as LDPE or polystyrene. Such containers provide a good hands-on example of the difference in modulus, since the rubbery (softer, more flexible) feeling of LDPE with respect to polypropylene of the same thickness is readily apparent. Rugged, translucent, reusable plastic containers made in a wide variety of shapes and sizes for consumers from various companies such as Rubbermaid and Sterilite are commonly made of polypropylene, although the lids are often made of somewhat more flexible LDPE so they can snap onto the container to close it. Polypropylene can also be made into disposable bottles to contain liquid, powdered, or similar consumer products, although HDPE and polyethylene terephthalate are commonly also used to make bottles. Plastic pails, car batteries, wastebaskets, pharmacy prescription bottles, cooler containers, dishes and pitchers are often made of polypropylene or HDPE, both of which commonly have rather similar appearance, feel, and properties at ambient temperature. A diversity of medical devices are made from PP. 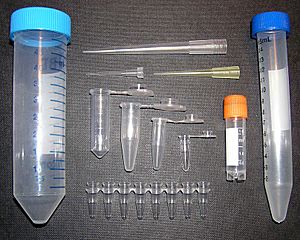 Polypropylene items for laboratory use, blue and orange closures are not made of polypropylene.

Polypropylene, highly colorfast, is widely used in manufacturing carpets, rugs and mats to be used at home.

Polypropylene is widely used in ropes, distinctive because they are light enough to float in water. For equal mass and construction, polypropylene rope is similar in strength to polyester rope. Polypropylene costs less than most other synthetic fibers.

Polypropylene is also used as an alternative to polyvinyl chloride (PVC) as insulation for electrical cables for LSZH cable in low-ventilation environments, primarily tunnels. This is because it emits less smoke and no toxic halogens, which may lead to production of acid in high-temperature conditions.

Polypropylene is also used in particular roofing membranes as the waterproofing top layer of single-ply systems as opposed to modified-bit systems.

Polypropylene is most commonly used for plastic moldings, wherein it is injected into a mold while molten, forming complex shapes at relatively low cost and high volume; examples include bottle tops, bottles, and fittings.

It can also be produced in sheet form, widely used for the production of stationery folders, packaging, and storage boxes. The wide color range, durability, low cost, and resistance to dirt make it ideal as a protective cover for papers and other materials. It is used in Rubik's Cube stickers because of these characteristics.

The availability of sheet polypropylene has provided an opportunity for the use of the material by designers. The light-weight, durable, and colorful plastic makes an ideal medium for the creation of light shades, and a number of designs have been developed using interlocking sections to create elaborate designs.

Polypropylene sheets are a popular choice for trading card collectors; these come with pockets (nine for standard-size cards) for the cards to be inserted and are used to protect their condition and are meant to be stored in a binder.

Expanded polypropylene (EPP) is a foam form of polypropylene. EPP has very good impact characteristics due to its low stiffness; this allows EPP to resume its shape after impacts. EPP is extensively used in model aircraft and other radio controlled vehicles by hobbyists. This is mainly due to its ability to absorb impacts, making this an ideal material for RC aircraft for beginners and amateurs.

Polypropylene is used in the manufacture of loudspeaker drive units. Its use was pioneered by engineers at the BBC and the patent rights subsequently purchased by Mission Electronics for use in their Mission Freedom Loudspeaker and Mission 737 Renaissance loudspeaker.

Polypropylene fibres are used as a concrete additive to increase strength and reduce cracking and spalling. In some areas susceptible to earthquakes (e.g., California), PP fibers are added with soils to improve the soil's strength and damping when constructing the foundation of structures such as buildings, bridges, etc.

Polypropylene fibres are also used in drywall joint compound for reinforcement. It can increase the flexibility and dimensional stability of the joint compound and reduce shrinkage and cracking when it dries.

In June 2016, a study showed that a mixture of polypropylene and durable superoleophobic surfaces created by two engineers from Ohio State University can repel liquids such as shampoo and oil. This technology could make it easier to remove all of the liquid contents from polypropylene bottles, particularly those that have high surface tension such as shampoo or oil. 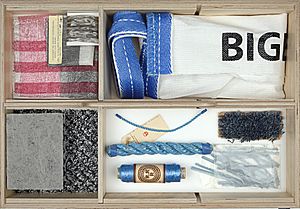 Polypropylene is a major polymer used in nonwovens, with over 50% used for diapers or sanitary products where it is treated to absorb water (hydrophilic) rather than naturally repelling water (hydrophobic). Other non-woven uses include filters for air, gas, and liquids in which the fibers can be formed into sheets or webs that can be pleated to form cartridges or layers that filter in various efficiencies in the 0.5 to 30 micrometre range. Such applications occur in houses as water filters or in air-conditioning-type filters. The high surface-area and naturally oleophilic polypropylene nonwovens are ideal absorbers of oil spills with the familiar floating barriers near oil spills on rivers.

Polypropylene, or 'polypro', has been used for the fabrication of cold-weather base layers, such as long-sleeve shirts or long underwear. Polypropylene is also used in warm-weather clothing, in which it transports sweat away from the skin. Polyester has replaced polypropylene in these applications in the U.S. military, such as in the ECWCS. Although polypropylene clothes are not easily flammable, they can melt, which may result in severe burns if the wearer is involved in an explosion or fire of any kind. Polypropylene undergarments are known for retaining body odors which are then difficult to remove. The current generation of polyester does not have this disadvantage.

Some fashion designers have adapted polypropylene to construct jewelry and other wearable items.

Its most common medical use is in the synthetic, nonabsorbable suture Prolene, manufactured by Ethicon Inc.

Polypropylene has been used in hernia and pelvic organ prolapse repair operations to protect the body from new hernias in the same location. A small patch of the material is placed over the spot of the hernia, below the skin, and is painless and rarely, if ever, rejected by the body. However, a polypropylene mesh will erode the tissue surrounding it over the uncertain period from days to years.

A notable application was as a transvaginal mesh, used to treat vaginal prolapse and concurrent urinary incontinence. Due to the above-mentioned propensity for polypropylene mesh to erode the tissue surrounding it, the FDA has issued several warnings on the use of polypropylene mesh medical kits for certain applications in pelvic organ prolapse, specifically when introduced in close proximity to the vaginal wall due to a continued increase in number of mesh-driven tissue erosions reported by patients over the past few years. On 3 January 2012, the FDA ordered 35 manufacturers of these mesh products to study the side effects of these devices. Due to the outbreak of the COVID-19 pandemic in 2020, the demand for PP has increased significantly because it's a vital raw material for producing meltblown fabric, which is in turn the raw material for producing facial masks. 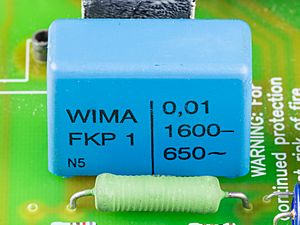 Very thin sheets (≈2–20 µm) of polypropylene are used as a dielectric within certain high-performance pulse and low-loss RF capacitors.

Expanded polypropylene (EPP) foam is a structural material in hobbyist radio control model aircraft. Unlike expanded polystyrene foam (EPS) which is friable and breaks easily on impact, EPP foam is able to absorb kinetic impacts very well without breaking, retains its original shape, and exhibits memory form characteristics which allow it to return to its original shape in a short amount of time.

When the cathedral on Tenerife, La Laguna Cathedral, was repaired in 2002–2014, it turned out that the vaults and dome were in a rather bad condition. Therefore, these parts of the building were demolished, and replaced by constructions in polypropylene. This was reported as the first time this material was used in this scale in buildings.

Under the trade name Ulstron polypropylene rope is used to manufacture scoop nets for whitebait. It has also been used for sheets of yacht sails.

Polymer banknotes are made from BOPP, where it provides a durable base and allows for the use of transparent security features by omitting opaque inks in the desired areas.

Polypropylene is recyclable and has the number "5" as its resin identification code:

All content from Kiddle encyclopedia articles (including the article images and facts) can be freely used under Attribution-ShareAlike license, unless stated otherwise. Cite this article:
Polypropylene Facts for Kids. Kiddle Encyclopedia.