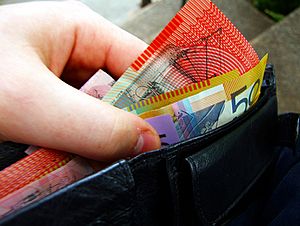 Polymer banknotes were created by the Reserve Bank of Australia, CSIRO and the University of Melbourne and were first used as money in Australia in 1988. These banknotes are made from polymer (plastic) which makes them last longer without getting ripped or torn, and they are harder to copy. Lots of countries now use polymer banknotes. Seven countries are now fully using polymer banknotes on all of their banknotes instead of paper. It is twice as expensive to make but lasts four times longer than paper banknotes. It is good for countries with lots of humidity, or wet countries, because the notes do not get damaged when it is wet.

The first polymer banknote released as currency was in Australia in 1988, commemorating the country's bicentennary of European settlement.

In 1967 forgeries of the Australian $10 note were found in circulation and the Reserve Bank of Australia was concerned about an increase in counterfeiting with the release of colour photocopiers that year. In 1968 the FGH started collaborations with RTASOC, and funds were made available in 1969 for the experimental production of distinctive papers. The insertion into banknotes of an optically variable device (OVD) created from diffraction gratings in plastic as a security device was proposed in 1972. The first patent arising from the development of polymer banknotes was filed in 1973. In 1974 the technique of lamination was used to combine materials; the all-plastic laminate eventually chosen was a clear, BOPP laminate, in which OVDs could be inserted without needing to punch holes.

An alternative polymer of polyethylene fibres, marketed as Tyvek by DuPont, was developed for use as currency by the American Bank Note Company in the early 1980s. Tyvek did not perform well in trials: smudging of ink and fragility were reported as problems. Only Costa Rica and Haiti issued Tyvek banknotes; test notes were produced for Ecuador, El Salvador, Honduras and Venezuela but never placed in circulation. Additionally, English printers Bradbury Wilkinson produced a version on Tyvek but marketed as Bradvek for the Isle of Man in 1983; however, they are no longer produced.

In the 1980s, Canadian engineering company AGRA Vadeko and US chemical company US Mobil Chemical Company developed a polymer substrate trademarked as DuraNote. It had been tested by the Bank of Canada in the 1980s and 1990s; test $20 and $50 banknotes were auctioned in October 2012. It was also tested by the Bureau of Engraving and Printing of the United States Department of the Treasury in 1997 and 1998, when 40,000 test banknotes were printed and evaluated; and was evaluated by the central banks of 28 countries.

Polymer banknotes were developed in Australia to replace paper banknotes with a more secure and more durable alternative.

The BOPP substrate is processed through the following steps:

A 10 Taka polymer note from Bangladesh.

Modern polymer banknotes were first developed by the Reserve Bank of Australia (RBA) and the Commonwealth Scientific and Industrial Research Organisation or CSIRO and first issued as currency in Australia during 1988, to coincide with Australia's bicentennial year. Note Printing Australia (a wholly owned subsidiary of the RBA) prints regular and commemorative banknotes for circulation, and has done so for 20 countries. Trading as Innovia Security, Innovia Films markets BOPP as "Guardian" for countries with their own banknote printing facilities.

As of 2014, at least seven countries have converted fully to polymer banknotes: Australia, Brunei, Canada, New Zealand, Papua New Guinea, Romania and Vietnam. Other countries and regions with notes printed on Guardian polymer in circulation include: Bangladesh, Brazil, Chile, Costa Rica, Dominican Republic, Hong Kong (for a 2-year trial), Indonesia, Israel, Kuwait, Malaysia, Mexico, Nepal (no longer issued), Philippines (no longer issued), Solomon Islands (no longer issued), Samoa, Singapore, Sri Lanka, Thailand and Zambia. Canada released its first polymer banknote ($100) on 14 November 2011, followed by the $50 banknote on 26 March 2012, the $20 banknote on 7 November 2012 and finally, the $10 and $5 banknotes on 7 November 2013. Countries and regions that have issued commemorative banknotes (which are not in circulation) on Guardian polymer include: China, Taiwan, Northern Ireland and Singapore.

In the United Kingdom, the first polymer banknotes were issued by the Northern Bank in Northern Ireland in 2000; these were a special commemorative issue bearing an image of the space shuttle. In March 2015, the Clydesdale Bank in Scotland began to issue polymer Sterling £5 notes marking the 125th anniversary of the building of the Forth Bridge. These were the first polymer notes to enter general circulation in the UK. The Royal Bank of Scotland followed in 2016 with a new issue of plastic £5 notes illustrated with a picture of author Nan Shepherd. In September 2016, the Bank of England began to issue £5 polymer notes with a picture of Winston Churchill; and in 2017 a polymer £10 began replacing its paper equivalent. Plans for a polymer £20 note for 2020 have been released, but the Bank of England has said it plans to change the final note, £50, to a polymer note. The £10 polymer banknotes have a picture of author Jane Austen. Although the new Bank of England notes will be 15% smaller than the older, paper issue, they will bear a similar design. Some businesses operating in the UK cash industry have opposed the switch to polymer, citing a lack of research into the cost impact of its introduction.

Timeline of adoptions and withdrawals

A 2000 lei note from Romania, issued to commemorate the last eclipse of the Millennium. 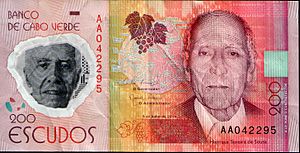 Banknote of 200 escudos, made of polymer

All content from Kiddle encyclopedia articles (including the article images and facts) can be freely used under Attribution-ShareAlike license, unless stated otherwise. Cite this article:
Polymer banknote Facts for Kids. Kiddle Encyclopedia.