Mauritania is a country in northwest Africa. The capital city, which is also the biggest city in the country, is Nouakchott. It is on the Atlantic coast. Its president is General Mohamed Oueld Abdel-Aziz.

Mauritania is generally flat, with vast arid plains broken by occasional ridges and cliff-like outcroppings. A series of scarps face south-west, longitudinally bisecting these plains in the center of the country. The scarps also separate a series of sandstone plateaus, the highest of which is the Adrar Plateau. It reaches an elevation of 500 meters (1,640 ft). Spring-fed oases lie at the foot of some of the scarps.

Isolated peaks, often rich in minerals, rise above the plateaus; the smaller peaks are called guelbs and the larger ones kedias. The concentric Guelb er Richat (also known as the Richat Structure) is a prominent feature of the north-central region. Kediet ej Jill, near the city of Zouîrât, has an elevation of 915 meters (3,002 ft) and is the highest peak.

Approximately three quarters of Mauritania is desert or semi-desert. As a result of extended, severe drought, the desert has been expanding since the mid-1960s. To the west, between the ocean and the plateaus, are alternating areas of clayey plains (regs) and sand dunes (ergs), some of which shift from place to place, gradually moved by high winds. The dunes generally increase in size and mobility toward the north. 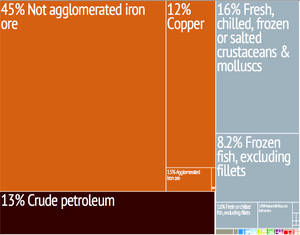 Despite being rich in natural resources, Mauritania has a low GDP. A majority of the population still depends on agriculture and livestock for a livelihood, even though most of the nomads and many subsistence farmers were forced into the cities by recurrent droughts in the 1970s and 1980s. Mauritania has extensive deposits of iron ore, which account for almost 50% of total exports. Gold and copper mining companies are opening mines in the interior.

The country's first deepwater port opened near Nouakchott in 1986. In recent years, drought and economic mismanagement have resulted in a buildup of foreign debt. In March 1999, the government signed an agreement with a joint World Bank-International Monetary Fund mission on a $54 million enhanced structural adjustment facility (ESAF). The economic objectives have been set for 1999–2002. Privatization remains one of the key issues. Mauritania is unlikely to meet ESAF's annual GDP growth objectives of 4–5%.

Oil was discovered in Mauritania in 2001 in the offshore Chinguetti field. Although potentially significant for the Mauritanian economy, its overall influence is difficult to predict. Mauritania has been described as a "desperately poor desert nation, which straddles the Arab and African worlds and is Africa's newest, if small-scale, oil producer." There may be additional oil reserves inland in the Taoudeni basin, although the harsh environment will make extraction expensive.

United Arab Emirates government, via its pilot green city Masdar, announced it will install new solar plants in the city of Atar which will supply an additional 16.6 megawatts of electricity. The plants will power about 39,000 homes and save 27,850 tonnes of carbon emissions per year.

All content from Kiddle encyclopedia articles (including the article images and facts) can be freely used under Attribution-ShareAlike license, unless stated otherwise. Cite this article:
Mauritania Facts for Kids. Kiddle Encyclopedia.