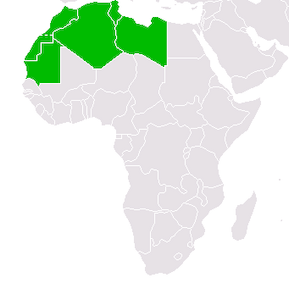 The Maghreb (Arabic: المغرب العربي‎code: ar is deprecated al-Maġrib al-ʿArabī) is the western part of the Arab world. It is in North Africa. The term is generally applied to all of Mauritania, Western Sahara, Morocco, Algeria, Tunisia, and Libya, but in older Arabic usage meant only the area of the three countries between the high ranges of the Atlas Mountains and the Mediterranean Sea (Morocco, Algeria and Tunisia). Historically, some writers also included Muslim ruled regions in Spain, Portugal, Sicily and Malta in the definition. Malta, in particular, still speaks a language based on its own Maghrebi Arabic variety: Maltese.

All content from Kiddle encyclopedia articles (including the article images and facts) can be freely used under Attribution-ShareAlike license, unless stated otherwise. Cite this article:
Maghreb Facts for Kids. Kiddle Encyclopedia.