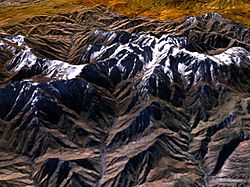 Tougkal in the Atlas Mountains

The Atlas Mountains (Amazigh: Idurar n Watlas, Arabic: جبال الأطلس‎) are a mountain range in northwest Africa. They extend about 2,400 km (1,500 miles) through Morocco, Algeria, and Tunisia. The highest peak is Tougkal, with an elevation of 4,167 metres (13,671 ft) in southwestern Morocco. The second highest mountain is the M'Goun of 4071 meters. The southwestern part is called "Anti-Atlas".

The Atlas ranges separate the Mediterranean and Atlantic coastlines from the Sahara Desert. Most of the people living in the Atlas Mountains are part of Berber tribes in Morocco and in Algeria.

The mountains are named after the ancient Greek Titan, Atlas.

All content from Kiddle encyclopedia articles (including the article images and facts) can be freely used under Attribution-ShareAlike license, unless stated otherwise. Cite this article:
Atlas Mountains Facts for Kids. Kiddle Encyclopedia.