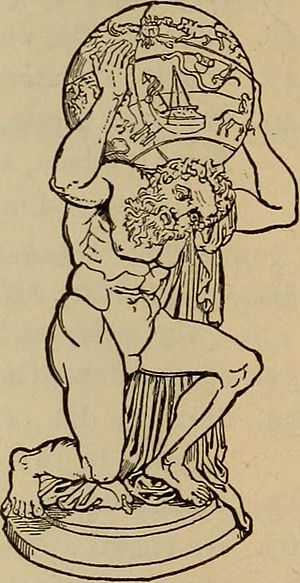 Atlas holds up the celestial sphere, in Naples

Atlas is a Titan in Greek mythology. He is the son of Iapetos. He has seven daughters with the Oceanid Pleione. They are called the Pleiades.

After the war between the Titans and the Olympians, Atlas was punished. Zeus forced him to hold the heaven on the western edge of the world. Later, the story about him changed and it was said that he held the whole world on his shoulders. Mostly in modern times, he is shown holding a globe of the world.

Heracles came to Atlas and asked him to for help with one of his Labours. He wanted Atlas to get the "Golden Apples" for him as only an immortal could take them. Atlas agreed, but only if Heracles would hold up the sky. Atlas was pleased to be free from its weight but Heracles tricked him into holding it again.

Perseus also came to Atlas for help after killing Medusa. He asked for food, and Atlas said he could not help. Perseus was angry and showed him the Medusa's head (which was able to turn people to stone). Atlas then became the Atlas Mountains. The name Atlas means "Hard and Enduring."

All content from Kiddle encyclopedia articles (including the article images and facts) can be freely used under Attribution-ShareAlike license, unless stated otherwise. Cite this article:
Atlas (mythology) Facts for Kids. Kiddle Encyclopedia.