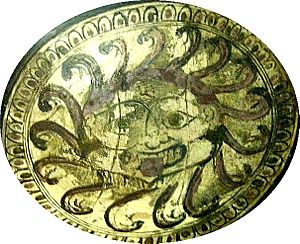 A painted plate, around 565 BCE

In Greek mythology, the Gorgons were female monsters that had fangs and serpents for hair with bronze claws. They were the daughters of Phorkys and Keto. The serpents in their hair were special: Everyone who looked at them was turned to stone. There were three Gorgons, named Stheno, Euryale and Medusa. Only Medusa was mortal. She was beheaded by Perseus. Medusa's head was brought to Athena. There are many motives showing Athena with an aegis, and a Gorgon's head on her chest.

Homer only talks about one Gorgon. Hesiod names all three, Stheno, the powerful one, Euryale,who could jump far, and trouble-ridden Medusa, the queen. According to Hesiod, they lived at the edge of the known world, in the Atlas Mountains. At a later time, Libya is also named as their home.

With Hellenism came the myth that the Gorgo was a sister of Alexander the Great. In this myth, she is a neck, a water spirit. The sailors of each passing boat are asked whether he is still alive. If they answer no, she takes the boat and the sailors into the water. The answer that saves the lives of the seamen is "Yes, and he reigns as a king" (Greek: Ζεί και βασιλέβει).

The heads of the Gorgons are often found on shields, capes and amulets. These were believed to be magic. The magic that is used against bad spirits and bad look is known as apotropaic magic.

All content from Kiddle encyclopedia articles (including the article images and facts) can be freely used under Attribution-ShareAlike license, unless stated otherwise. Cite this article:
Gorgon Facts for Kids. Kiddle Encyclopedia.