Alexander the Great facts for kids

Alexander III of Macedon (20/21 July 356 BC – 10/11 June 323 BC), commonly known as Alexander the Great, was a king (basileus) of the ancient Greek kingdom of Macedon and a member of the Argead dynasty.

He was born in Pella in 356 BC and succeeded his father Philip II to the throne at the age of 20. He spent most of his ruling years on an unequalled at the time military campaign through Asia and northeast Africa, and by the age of thirty, he had created one of the largest empires of the ancient world, stretching from Greece to northwestern India. He was undefeated in battle and is widely considered one of history's most successful military commanders.

During his youth, Alexander was tutored by Aristotle until age 16. After Philip's assassination in 336 BC, he succeeded his father to the throne and inherited a strong kingdom and an experienced army. Alexander was awarded the generalship of Greece and used this authority to launch his father's project to lead the Greeks in the conquest of Persia.

In 334 BC, he invaded the Achaemenid Empire (Persian Empire) and began a series of campaigns that lasted 10 years. Following the conquest of Anatolia, Alexander broke the power of Persia in a series of decisive battles, most notably the battles of Issus and Gaugamela. He overthrew the Persian King Darius III and conquered the Achaemenid Empire in its entirety. At that point, his empire stretched from the Adriatic Sea to the Beas River.

Alexander endeavoured to reach the "ends of the world and the Great Outer Sea" and invaded India in 326 BC, winning an important victory over the Pauravas at the Battle of the Hydaspes. He eventually turned back at the demand of his homesick troops, dying in Babylon in 323 BC, the city that he planned to establish as his capital, without executing a series of planned campaigns that would have begun with an invasion of Arabia.

Because of the diversity of the conquered lands Alexander the Great was known by different names, if not in his time then in the stories passed down in generations since then:

Alexander's conquests and the administrative needs of his Greek-speaking successors promoted the spread of the Greek language and Greek culture across the eastern Mediterranean and into Mesopotamia. He founded some twenty cities that bore his name, most notably Alexandria in Egypt.

Alexander died in Babylon in 323 BC, of unknown causes. Poison, murder, or a fever after a battle have all been suggested, he was only 32 years old. Alexander's body was laid in a gold anthropoid sarcophagus that was filled with honey, which was in turn placed in a gold casket.

Alexander's will called for military expansion into the southern and western Mediterranean, monumental constructions, and the intermixing of Eastern and Western populations. It included: 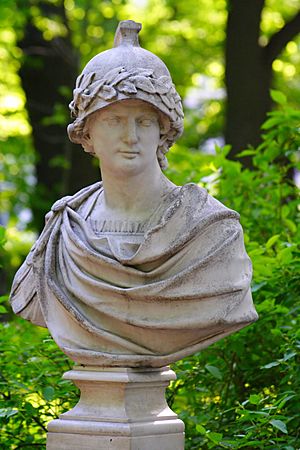 Bust of Alexander the Great Saint-Petersburg

In the years following his death, a series of civil wars tore his empire apart. Several states were then ruled by the Diadochi, Alexander's surviving generals and heirs. They fought and conquered each other. The largest surviving piece was the Seleucid Empire.

While Alexander's funeral cortege was on its way to Macedon, Ptolemy seized it and took it temporarily to Memphis. His successor, Ptolemy II Philadelphus, transferred the sarcophagus to Alexandria, where it remained until at least late Antiquity. Ptolemy IX Lathyros, one of Ptolemy's final successors, replaced Alexander's sarcophagus with a glass one so he could convert the original to coinage.

The recent discovery of an enormous tomb in northern Greece, at Amphipolis, dating from the time of Alexander the Great has given thought that its original use was to be the burial place of Alexander.

Pompey, Julius Caesar and Augustus all visited the tomb in Alexandria, where Augustus, allegedly, accidentally knocked the nose off. Caligula was said to have taken Alexander's breastplate from the tomb for his own use. Around AD 200, Emperor Septimius Severus closed Alexander's tomb to the public.

The so-called "Alexander Sarcophagus", discovered near Sidon and now in the Istanbul Archaeology Museum, is so named not because it was thought to have contained Alexander's remains, but because its stone carvings depict Alexander and his companions fighting the Persians and hunting.

Alexander became legendary as a classical hero in the mould of Achilles, and he features prominently in the history and mythic traditions of both Greek and non-Greek cultures. He became the model against which military leaders compared themselves, and military academies throughout the world still teach his tactics. He is often ranked among the most influential people in history.

All content from Kiddle encyclopedia articles (including the article images and facts) can be freely used under Attribution-ShareAlike license, unless stated otherwise. Cite this article:
Alexander the Great Facts for Kids. Kiddle Encyclopedia.