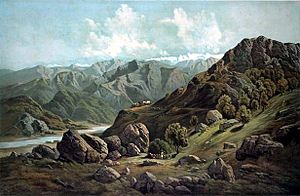 The Sutlej River (sometimes spelled Satluj River) is a branches of the Indus River. It is the longest of the five major rivers that flow through the region of Punjab in northern India and Pakistan. It is north of the Vindhya Range, south of the Hindu Kush, and east of the Central Makran range in Pakistan.

It is the easternmost branch of the Indus River. The source of the river is at Lake Rakshastal in Tibet, near Mount Kailas. It flows generally west and southwest through the region of Punjab. The region to its south and east is dry, and is known as the Thar Desert.

In the Mahabharata, the river is named the Satadree. It is also known as the Red River. 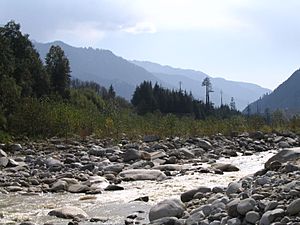 The Beas River (Punjabi: ਬਿਆਸ) is the second easternmost of the rivers of the Punjab region. The river rises in the Himalayas in central Himachal Pradesh, India, and flows for some 290 miles (470 km) to the Sutlej River in the west of the Indian Punjab state.

The waters of the Beas and Sutlej rivers as well as of the Ravi River are allocated to India under the Indus Waters Treaty between India and Pakistan.

All content from Kiddle encyclopedia articles (including the article images and facts) can be freely used under Attribution-ShareAlike license, unless stated otherwise. Cite this article:
Sutlej Facts for Kids. Kiddle Encyclopedia.