A bridge of boats on the Ravi River in about 1895 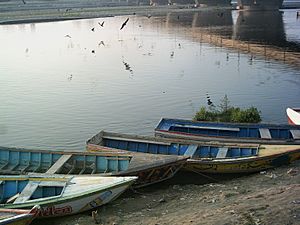 The Ravi River at Lahore

The Ravi River is a river in Kashmir and Pakistan. It is one of the five rivers which give Punjab its name.

It is also one of the major five rivers/tributaries of Indus.

The Ravi was known as Parushani or Iravati to Indians in Vedic times and Hydraotes to the Ancient Greeks.

It originates in the Himalayas in the Chamba district of Himachal Pradesh following a north-westerly course. It turns to the south-west, near Dalhousie, and then cuts a gorge in the Dhaola Dhar range entering the Punjab plain near Madhopur. It then flows along the Indo-Pak border for some distance before entering Pakistan and joining the Chenab River.

The total length of the river is about 720 km.

The waters of the Ravi river are allocated to India under the Indus Waters Treaty between India and Pakistan and the resulting Indus Basin Project.

It is also called 'The river of Lahore' since that great city is located on its eastern bank. On its western bank is located the famous town of Shahdara with the tomb of Jahangir and the Tomb of Noor Jahan.

All content from Kiddle encyclopedia articles (including the article images and facts) can be freely used under Attribution-ShareAlike license, unless stated otherwise. Cite this article:
Ravi River Facts for Kids. Kiddle Encyclopedia.