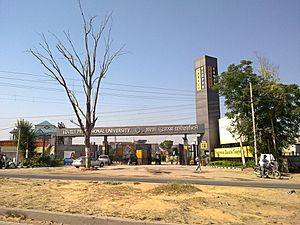 Doaba (Urdu: دوابہ) is the region of Indian Punjab surrounded by the rivers Beas and Sutlej. The name "Doaba" literally translates to "land of two rivers" ("Do" two, "Ab" river; Farsi). It is one of the most fertile regions of the world, and was the centre of the Green Revolution in India. To this day, it remains one of the largest per capita producers of wheat in the world.

The people of Doaba started out as agriculturalists, but have now diversified into education, sports and entrepreneurship.

All content from Kiddle encyclopedia articles (including the article images and facts) can be freely used under Attribution-ShareAlike license, unless stated otherwise. Cite this article:
Doaba Facts for Kids. Kiddle Encyclopedia.