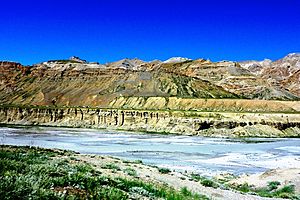 The Chenab River is a major river of India and Pakistan. It forms in the upper Himalayas in the Lahaul and Spiti district of Himachal Pradesh, India, and flows through the Jammu region of Jammu and Kashmir into the plains of the Punjab, Pakistan. The waters of the Chenab are allocated to Pakistan under the terms of the Indus Waters Treaty.

The Baglihar hydropower dam is being built (as of 2006) on the Chenab River in the Doda district. This is about 110 kilometers eastward of the Pakistan border in the Jammu division of the Indian state of Jammu and Kashmir. The dam is one of 9 hydro-electric projects on the Chenab River.

All content from Kiddle encyclopedia articles (including the article images and facts) can be freely used under Attribution-ShareAlike license, unless stated otherwise. Cite this article:
Chenab River Facts for Kids. Kiddle Encyclopedia.