The Indus Waters Treaty is a water-sharing treaty between the Republic Of India and Islamic Republic Of Pakistan. The treaty was signed in Karachi on September 19, 1960 by the then Indian Prime Minister Jawaharlal Nehru and the then President of Pakistan Field Marshal Mohammad Ayub Khan. The World Bank is a signatory as a third party.

The countries agree to exchange data and co-operate in matters related to the treaty. For this purpose, treaty creates the Permanent Indus Commission, with a commissioner who will be appointed by each country. 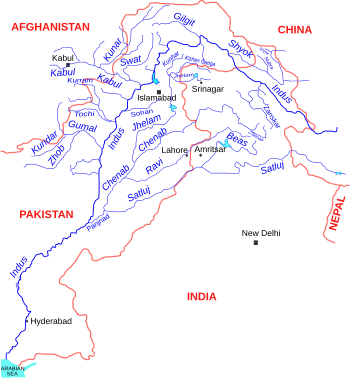 All content from Kiddle encyclopedia articles (including the article images and facts) can be freely used under Attribution-ShareAlike license, unless stated otherwise. Cite this article:
Indus Waters Treaty Facts for Kids. Kiddle Encyclopedia.