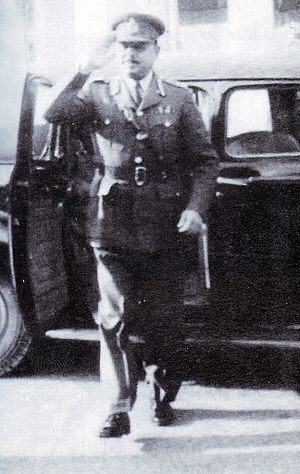 General Muhammad Ayub Khan (14 May 1907 – 19 April 1974) was a general of the Pakistan Army and a self-proclaimed Field Marshal during the mid-1960s. A dictator who imposed martial law he also became the President of Pakistan from 1958 to 1969. He became Pakistan's first native Commander-in-Chief in 1951. He was the youngest full-rank general and self-appointed Field Marshal in Pakistan's military history.

Khan became president in 1958 as part of a non-violent coup. In the 1965 presidential election, people thought that Khan had cheated so he could win against Fatimah Jinnah.

All content from Kiddle encyclopedia articles (including the article images and facts) can be freely used under Attribution-ShareAlike license, unless stated otherwise. Cite this article:
Ayub Khan Facts for Kids. Kiddle Encyclopedia.