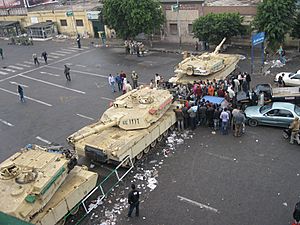 Martial law in Egypt: Egyptian-flagged tanks man an apparent checkpoint just outside the midtown Tahrir area during the 2011 Egyptian revolution.

Martial law represents the imposition for military rule via military authorities on an emergency basis, and is usually imposed on a temporary basis if the civilian government fails to function properly. In most cases, military forces are deployed to subdue crowds,to maintain order and secure buildings of the government.

All content from Kiddle encyclopedia articles (including the article images and facts) can be freely used under Attribution-ShareAlike license, unless stated otherwise. Cite this article:
Martial law Facts for Kids. Kiddle Encyclopedia.