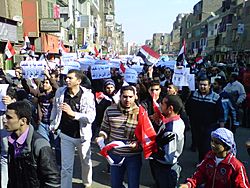 Protesters marching on The Day of Anger.

In the 2011 Egyptian revolution, many demonstrations and riots were held in Egypt. It is also called The Day of Anger and The Day of Revolt. It started on January 25, 2011.

Before the demonstrations began, there was an uprising in Tunisia. In the weeks after that, demonstrations and riots began in Egypt. The people who started these protests hoped that people would be encouraged to mobilize (or start working together to protest) because of the Tunisian uprising. Protests happened in Cairo, Alexandria, Suez and Ismailiya.

On the first day of the protests, the Egyptian government censored most of the media (like newspapers and news stations) inside Egypt. The government also tried to block most social media websites, which the protesters had used to spread news about the events. On January 28, an Internet and cell phone "blackout" began across Egypt. However, before dawn the next morning, the blackout for cell phones was ended.

People demonstrated and protested about many different things. Some of these things were police brutality, state of emergency laws, not having free elections, corruption, limits on freedom of speech, high unemployment, low minimum wages, not having enough housing, food price inflation, and poor living conditions.

Mohamed ElBaradei said that one of the revolution's goals could be to force Hosni Mubarak to quit. ElBaradei was seen as someone who would probably be a leader in a new government.

Before 2011, protests were common, but they were always local; they did not spread to different parts of the country. However, on January 25, 2011, major protests and riots broke out all over the country. January 25 became the "Day of Anger". Egyptian opposition groups (groups working for change) and other activists had picked this date for a major demonstration. The 2011 protests have been called "unprecedented" for Egypt. This means that nothing like the protests had ever happened before. The protests have also been called "the largest display of popular dissatisfaction in recent memory". These were the largest demonstrations seen in Egypt since the 1977 Egyptian Bread Riots. For the first time, Egyptians from different social backgrounds, economic backgrounds, and faiths joined together to protest.

During the protests, the capitol city of Cairo was described as "a war zone". In the port city of Suez, there were many violent clashes. The Egyptian government used different methods to try to break up and limit protests. Anti-riot police groups used shields, rubber bullets, batons, water cannons, and tear gas. At times, they also used live ammunition. Most of the police response to the protests was non-lethal. However, some people were killed. The government turned off internet access and set a curfew. The government argued that they needed to make sure there was as little disruption from the protests as possible. They said this was needed to keep order and to keep Islamic fundamentalist groups from rising up.

Many people across the world became interested in the protests in Egypt. This was partly because of things like Twitter, Facebook, and YouTube. Activists, and people interested in the protests, were able to use these social media platforms, and others. They used these platforms to talk to each other, work together, and keep records of what was happening. As the protests got more publicity, the Egyptian government tried harder to limit people's access to the Internet, especially social media.

On February 11, 2011, Mubarak resigned from the presidency. On 24 May, he was ordered to stand trial on charges of premeditated murder of peaceful protesters. He was found guilty and sentenced to life imprisonment.

written about the revolution

All content from Kiddle encyclopedia articles (including the article images and facts) can be freely used under Attribution-ShareAlike license, unless stated otherwise. Cite this article:
2011 Egyptian revolution Facts for Kids. Kiddle Encyclopedia.