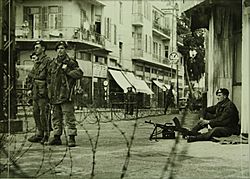 Curfews may be made by governments in times of war or civil unrest. This is supposed to stop violence.

Curfews may also be issued to young people. They are told that they have to be indoors after a certain time.

The word "curfew" comes from the French phrase "couvre-feu" which means "cover the fire". It was used to describe the time when all lamps and candles had to be blown out.

All content from Kiddle encyclopedia articles (including the article images and facts) can be freely used under Attribution-ShareAlike license, unless stated otherwise. Cite this article:
Curfew Facts for Kids. Kiddle Encyclopedia.