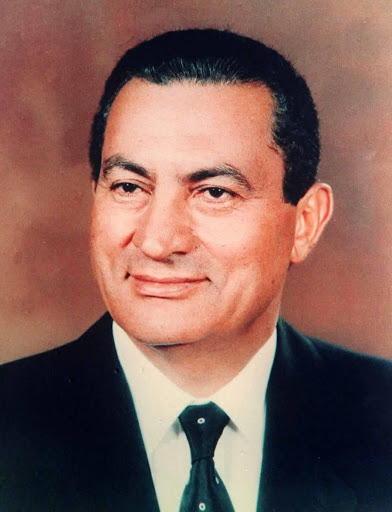 Muhammad Hosni Said Mubarak (Arabic: محمد حسنى سيد مبارك; born 4 May 1928), commonly known as Hosni Mubarak (حسنى مبارك), is a former President of Egypt. He was in that position from from 14 October 1981 to 11 February 2011.

Mubarak became the Vice-President of the Republic of Egypt after moving up the ranks of the Egyptian Air Force. Then he became the President after President Anwar Sadat was assassinated on 6 October 1981. His almost thirty-year presidency made him Egypt's longest-serving ruler since Muhammad Ali Pasha.

As President of Egypt, Mubarak is thought to have been one of the most powerful leaders in the region. Under the 1971 Constitution of Egypt, Mubarak exercised strong control over the country and was generally considered a dictator. In 2005, he called an election and easily won it. Many opponents believed Mubarak changed the election results so he could win.

In early 2011, during the Arab Spring, there were huge protests against his government. In the end, Mubarak resigned and handed over power to the armed forces. It is hoped that elections later that year for a new government. On 2 June 2012, Mubarak was sentenced to life imprisonment for ordering the shooting of protesters in the revolution that ousted him.

All content from Kiddle encyclopedia articles (including the article images and facts) can be freely used under Attribution-ShareAlike license, unless stated otherwise. Cite this article:
Hosni Mubarak Facts for Kids. Kiddle Encyclopedia.