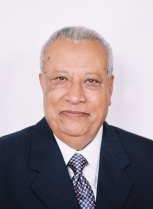 Atef Muhammad Ebeid (Arabic: عاطف محمد عبيد{{IPA-arz|ˈʕɑːtˤef mæˈħæmmæd ʕeˈbeːd|IPA}}; 14 April 1932 – 12 September 2014) was an Egyptian politician. He was a member of the National Democratic Party. He served as the Prime Minister of Egypt from 5 October 1999 until 14 July 2004. Ahmed Nazif became PM after Atef Ebeid. He was sentenced to ten years in jail on 1 March 2012 for squandering public funds. He was acquitted in January 2013.

Ebeid was born in Tanta, Gharbiya Governorate to a Muslim family. He went to Cairo University and later became a teacher there.

All content from Kiddle encyclopedia articles (including the article images and facts) can be freely used under Attribution-ShareAlike license, unless stated otherwise. Cite this article:
Atef Ebeid Facts for Kids. Kiddle Encyclopedia.