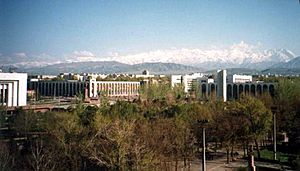 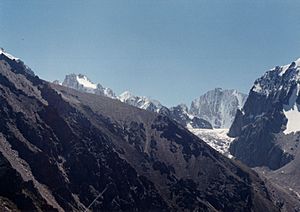 Bishkek (Бишкек) is the capital city of Kyrgyzstan. It has a population of 900,000 (2005). It was originally founded in 1878 as the Russian fortress of Pishpek (Пишпек). From 1926 until 1991 it was known as Frunze (Фрунзе), after the Bolshevik military leader Mikhail Frunze. In the Kyrgyz language, a Bishkek is a churn used to make stirred horse milk (kumis), the Kyrgyz national drink.

All content from Kiddle encyclopedia articles (including the article images and facts) can be freely used under Attribution-ShareAlike license, unless stated otherwise. Cite this article:
Bishkek Facts for Kids. Kiddle Encyclopedia.