The Kyrgyz people are a Turkic ethnic people living in Central Asia and China. Kyrgyzstan is their home country. Most of them are Sunni Muslims.

What does their name mean

It comes from the Turkic word kyrk which means "forty". Kyrgyz means "a collection of forty tribes".

The hero Manas unified 40 tribes against the Khitans. The History of Yuan (written 1370) says there were 40 women born on a steppe.

Their name is also spelt Kirgiz (in China). In Kyrgyz, it is Кыргыз / قىرعىز.

Where are they from 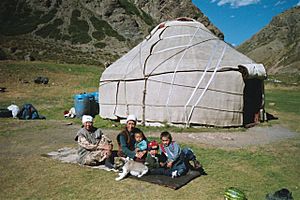 They come from Southern Siberia since at least 201 BC. They descend from the Yenisei Kyrgyz. The Yenisei Kyrgyz lived in the upper Yenisey River valley, central Siberia. The earliest Kyrgyz were also related to the Sakas (Scythians), Wusun, Dingling, Mongols and Xiongnu.

They first appear in Sima Qian's Records of the Grand Historian (109 - 91 BC, Han dynasty, China). They were called Gekun (鬲昆, 隔昆) or Jiankun (堅昆).

In 840, the Kyrgyz allied with the Tang dynasty to defeat the Uyghur Khaganate (Mongolia). The Kyrgyz qaghan (king) killed the Uyghur qaghan and rescued Princess Taihe. They moved to Jeti-su and spread south to the Tian Shan mountains and Xinjiang. The Kyrgyz then lived peacefully around Central Asia and Xinjiang, as vassals to the Tang.

The Tanghuiyao (8–10 c) called them Tsze-gu (Kirgut) and Xiajiasi. According to Tang records Xiajia could mean "yellow head and red face". That's what the Uyghurs called the Kyrgyz. Their tamga (tribe symbol) is identical to the modern day Kyrgyz tamga.

In the 10 - 12 c, the Kara-Khanid and then Western Liao invaded the area. In the 13th century the Mongol Empire unified everybody. Genghis Khan's first son Jochi occupied Kyrgyzstan.

They were part of the Chagatai Khanate and ruled by other Turkic people. In 1685 the Oirat (Dzungar, Mongolic) ruled them.

Russia then took over, Modern Kyrgyzstan declared independence in 1991.

By the 16th century they lived in Siberia, Xinjiang, Tian Shan, Pamir-Alay, Middle Asia, Urals, Kazakhstan, etc. In China, the term Kyrgyz also refers to the oldest Turkic tribes that lived there (the Tiele and Yeniseian Kyrgyz).

Genetic shows that Kyrgyz have mostly East Eurasian. In Tajikstan, East Eurasian ancestry is one half to two-thirds.

During the Tang Dynasty, they were described with "red hair and green eyes", while those with dark hair and dark eyes descended from the Chinese.

The Kyrgyz were fair-skinned, green- or blue-eyed and red-haired people with East Asian features.

Nowadays Kyrgyz are mostly Muslims of the Hanafi Sunni school.

But they were originally shamanist. Arab traders travelled along the Silk Road and arrived by the 8th century. But the Kyrgyz were not immediately converted. The Persian text Hudud al-'alam, said that the Kyrgyz "venerate the Fire and burn the dead".

Islam spread during the Mongol empire and following Chagatai Khanate.

By the 18th century the Kyrgyz were converted by the Khanate of Kokand (a vassal of the Qing dynasty). 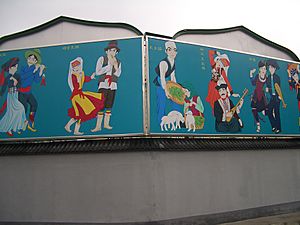 Chinese-Kyrgyz people on a poster near the Niujie Mosque in Beijing. (Fourth from the left, between the Dongxiang and the Kam).

The Kyrgyz-Chinese are one of the 56 ethnic groups of China. There are more than 145,000 Kyrgyz livinng in China. They are known as Kē'ěrkèzī zú (Chinese: 柯尔克孜族). They live mainly in Xinjiang.

In the 19th century, the Russians conquered Kyrgyz land and drove many to China. The Kyrgyz had a better life in China than in Russia. The Russians fought against the Muslim nomadic Kyrgyz. But because there were so many Chinese-Kyrgyz, the Russians stopped because they did not want to fight against the Chinese. The Muslim Kyrgyz were sure that in any upcoming conflict, China would defeat Russia.

Some are called the "Fuyu Kyrgyz". They are Yenisei Kirghiz (Khakas people) people. In the 17th c, the Dzungar khanate moved them from the Yenisei river to Dzungaria. In the 18th c, the Qing dynasty then defeated Dzungaria and moved them to Manchuria. They now live in Wujiazi Village, Fuyu County, Heilongjiang. Their language is related to the Khakas language (the Fuyü Gïrgïs dialect).

They speak a Turkic language. It used to be written in Turkic old script. In Kyrgyzstan, it is written with the Cyrillic alphabet. In China it is written with an Arabic script. President Atambaev of Kyrgyzstan said switching from Cyrillic to Latin (like Kazakhstan had) may hurt communication with Kyrgyz people in Russia.

All content from Kiddle encyclopedia articles (including the article images and facts) can be freely used under Attribution-ShareAlike license, unless stated otherwise. Cite this article:
Kyrgyz people Facts for Kids. Kiddle Encyclopedia.