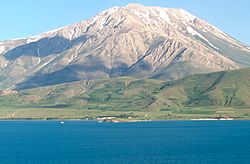 Lake Van (Turkish: Van Gölü, Armenian: Վանա լիճ) is the largest lake in Turkey, in the far east of the country.

Akdamar Island is in this lake. Although Lake Van is situated at an altitude of 1,640 m (5,380 ft) with harsh winters, it does not freeze due to its high salinity except occasionally the shallow northern section.

The lake was the centre of the Urartian kingdom from about 1000 BC, and the capital of Urartu, Tushpa, was on the shore of Lake Van (on the site of the medieval castle of Van, west of Van city).

Later the land around the lake was ruled by Armenians. Along with Lake Sevan in today's Armenia and Lake Urmia in today's Iran, Van was one of the three great lakes of the Armenian Kingdom, referred to as the seas of Armenia.

All content from Kiddle encyclopedia articles (including the article images and facts) can be freely used under Attribution-ShareAlike license, unless stated otherwise. Cite this article:
Lake Van Facts for Kids. Kiddle Encyclopedia.