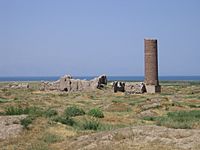 Ruins at the location of old city of Van.

Van (Armenian Վան) is a city in eastern Turkey and the seat of Van Province, and is on the eastern shore of Lake Van. The city's population in 2005 was 284,464. According to the Encyclopedia of the Orient, Kurds form the majority though no census based on ethnicity was ever held in Turkey.

All content from Kiddle encyclopedia articles (including the article images and facts) can be freely used under Attribution-ShareAlike license, unless stated otherwise. Cite this article:
Van, Turkey Facts for Kids. Kiddle Encyclopedia.