There are nine institutions of higher education in the city, most notably the Karlsruhe Institute of Technology. Karlsruhe/Baden-Baden Airport is the second-busiest airport of Baden-Württemberg after Stuttgart Airport, and the 17th-busiest airport of Germany. 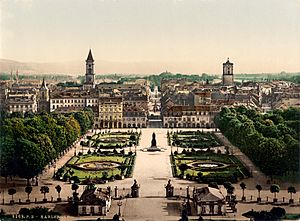 Charles William founded the city on June 17, 1715. The founding of the city is closely linked to the construction of the palace. Karlsruhe became the capital of Baden-Durlach, and in 1771, of the united Baden until 1945. Built in 1822, the Ständehaus was the first parliament building in a German state. In the aftermath of the democratic revolution of 1848, a republican government was elected here.

Karlsruhe was visited by Thomas Jefferson during his time as the American envoy to France; when Pierre Charles L'Enfant was planning the layout of Washington, DC, Jefferson passed to him maps of 12 European towns to consult, one of which was a sketch he had made of Karlsruhe during his visit. 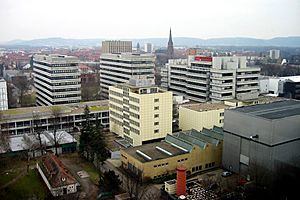 The Karlsruhe Pyramid is a pyramid made of red sandstone, located in the centre of the market square of Karlsruhe, Germany. It was made in the years 1823–1825 over the vault of the city's founder, Margrave Charles III William (1679–1738)

In 1860, the first-ever international professional convention of chemists, the Karlsruhe Congress, was held in the city.

Much of the central area, including the palace, was reduced to rubble by Allied bombing during World War II, but was rebuilt after the war. Located in the American zone of the postwar Allied occupation, Karlsruhe was home to an American military base, established in 1945. In 1995, the bases closed, and their facilities were turned over to the city of Karlsruhe. 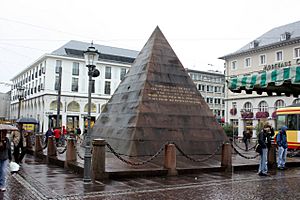 The Stadtgarten is a recreational area near the main railway station (Hauptbahnhof) and was rebuilt for the 1967 Federal Garden Show (Bundesgartenschau). It is also the site of the Karlsruhe Zoo.

The Durlacher Turmberg has a look-out tower (hence its name). It is a former keep dating back to the 13th century.

The Marktplatz has a stone pyramid marking the grave of the city's founder. Built in 1825, it is the emblem of Karlsruhe. The city is nicknamed the "fan city" (die Fächerstadt) because of its design layout, with straight streets radiating fan-like from the Palace.

The Karlsruhe Palace (Schloss) is an interesting piece of architecture; the adjacent Schlossgarten includes the Botanical Garden with a palm, cactus and orchid house, and walking paths through the woods to the north. 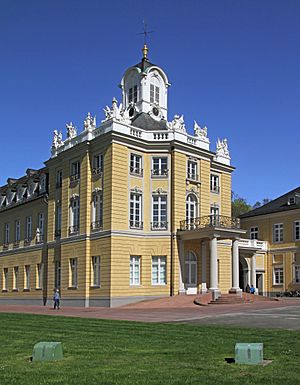 The so-called Kleine Kirche (Little Church), built between 1773 and 1776, is the oldest church of Karlsruhe's city centre.

The main cemetery of Karlsruhe is the oldest park-like cemetery in Germany. The crematorium was the first to be built in the style of a church.

Karlsruhe is also home to a Museum of Natural History, an opera house (the Baden State Theatre), as well as a number of independent theatres and art galleries.

Karlsruhe is also home to the Majolika-Manufaktur, the only art-ceramics pottery studio in Germany. Founded in 1901. A 'blue streak' (Blauer Strahl) consisting of 1,645 ceramic tiles, connects the studio with the Palace. It is the world's largest ceramic artwork.

Another tourist attraction is the Centre for Art and Media (Zentrum für Kunst und Medientechnologie, or ZKM), which is located in a converted ammunition factory.

All content from Kiddle encyclopedia articles (including the article images and facts) can be freely used under Attribution-ShareAlike license, unless stated otherwise. Cite this article:
Karlsruhe Facts for Kids. Kiddle Encyclopedia.