Baden is a historical state in south-west Germany. 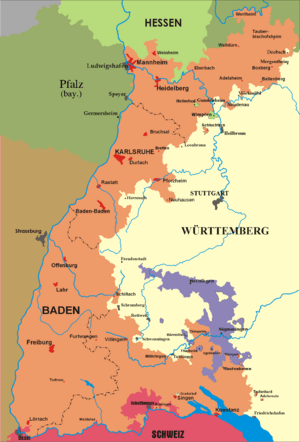 The Margraviate of Baden (German: Markgrafschaft Baden) was made in 1112. From 1190 to 1771, Baden was broken up into different smaller states. When the Holy Roman Empire ended in 1806, the Margraviate of Baden became the larger and more powerful Grand Duchy of Baden (German: Großherzogtum Baden). After World War I ended in 1918, the monarchy in Baden ended so Baden became a republic.

All content from Kiddle encyclopedia articles (including the article images and facts) can be freely used under Attribution-ShareAlike license, unless stated otherwise. Cite this article:
Baden Facts for Kids. Kiddle Encyclopedia.