The Grand Duchy of Hesse (German: Großherzogtum Hessen) was a former state that existed in modern-day Germany. It was formed in 1806 after the dissolution of the Holy Roman Empire as a result of the actions of Napoleon, who then elevated the former Landgraviate of Hesse-Darmstadt to the level of grand duchy. For this reason, this state was occasionally known simply as Hesse-Darmstadt.

Because Hesse-Darmstadt was a member of Napoleon's Confederation of the Rhine, it was forced to give up a considerable amount of territory at the 1815 Congress of Vienna. The territory of the Duchy of Westphalia, which Hesse-Darmstadt received from the 1803 Reichsdeputationshauptschluss, was given to the Kingdom of Prussia. However, it received some territory on the western bank of the Rhine, including the important federal fortress at Mainz. 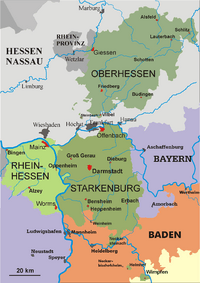 The three provinces of the Grand Duchy of Hesse: Upper Hesse, Starkenburg and Rhenish Hesse

The Grand Duchy of Hesse was divided into three provinces:

All content from Kiddle encyclopedia articles (including the article images and facts) can be freely used under Attribution-ShareAlike license, unless stated otherwise. Cite this article:
Grand Duchy of Hesse Facts for Kids. Kiddle Encyclopedia.