The flag of the Grand Duchy. 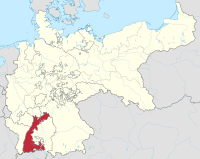 The location of the Grand Duchy as shown within the borders of modern Germany. 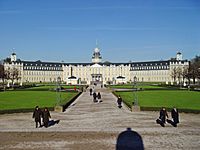 The Schloss Karlsruhe the palace of the Grand Duke and his family.

Originally the grand ducal family were entitled to the style of Highness. The heir to the throne was usually known as the Hereditary Prince with the higher style of Royal Highness.

The state was abolished in 1918 after the German Revolution where several monarchies ended.

All content from Kiddle encyclopedia articles (including the article images and facts) can be freely used under Attribution-ShareAlike license, unless stated otherwise. Cite this article:
Grand Duchy of Baden Facts for Kids. Kiddle Encyclopedia.