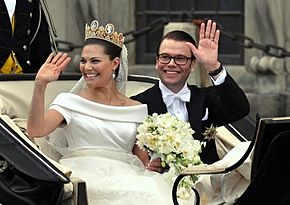 The Duchess and Duke of Västergötland on their wedding day

Royal Highness is a style of address traditionally used to address or refer to members of the royal families. This address is usually for princes, other than monarchs, and their female consorts. This style ranks below that of Imperial Highness. Historically the term was first used by Gaston, Duke of Orléans, younger son of King Henry IV of France. He encountered this style in Brussels and used it himself. His children later used the style, considering it their right as grandchildren of France. In contradiction to other European kingdoms, the kingdom of Denmark reserves the superior style of Royal Highness only to the children of the monarch and the children of the crown prince; other grandchildren of a Danish monarch enjoy the style of Highness, e.g. Princess Elisabeth of Denmark.

All content from Kiddle encyclopedia articles (including the article images and facts) can be freely used under Attribution-ShareAlike license, unless stated otherwise. Cite this article:
Royal Highness Facts for Kids. Kiddle Encyclopedia.