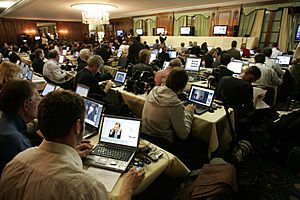 Journalists at a press conference

Journalism refers to the production and distribution of reports on recent events. The word journalism applies to the occupation, using methods of gathering information and using literary techniques. Various forms of journalistic mediums include: print, television, radio, Internet and in the past: newsreels.

The advent of the Internet and smartphones has brought significant changes to the media landscape in recent years. This has created a shift in the consumption of print media channels, as people increasingly consume news through e-readers, smartphones, and other personal electronic devices, as opposed to the more traditional formats of newspapers, magazines, or television news channels. Newspapers have seen print revenues sink at a faster pace than the rate of growth for digital revenues. 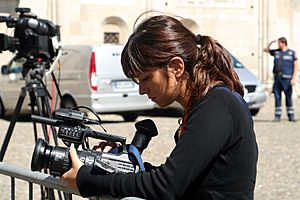 When writing stories, objectivity and bias are issues of concern to journalists. Some stories are intended to represent the author's own opinion; others are more neutral or feature balanced points-of-view. In a print newspaper, information is organized into sections and the distinction between opinionated and neutral stories is often clear. Online, many of these distinctions break down. Readers should pay careful attention to headings and other design elements to ensure that they understand the journalist's intent.

Journalists are "supposed" to be "objective" and "neutral" and that they be guided by professional codes of ethics and do their best to represent all legitimate points of view. 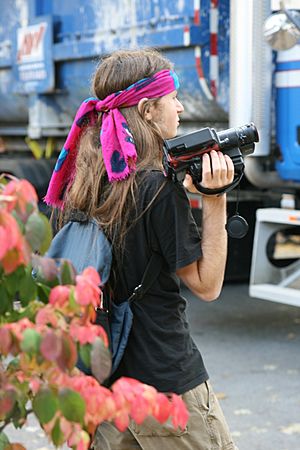 "Fake news" is deliberately untruthful information which can often spread quickly on social media or by means of fake news websites. It is often published to intentionally mislead readers to ultimately benefit a cause, organization or an individual. A glaring example was the proliferation of fake news in social media during the 2016 U.S. presidential election.

Conspiracy theories, hoaxes, and lies have been circulated under the guise of news reports to benefit specific candidates. One example is a fabricated report of Hillary Clinton's email which was published by a non-existent newspaper called The Denver Guardian. Many critics blamed Facebook for the spread of these materials. Mark Zuckerberg, the CEO of Facebook, has acknowledged the company's role in this problem in a testimony before a combined Senate Judiciary and Commerce committee hearing on April 20, 2018.

All content from Kiddle encyclopedia articles (including the article images and facts) can be freely used under Attribution-ShareAlike license, unless stated otherwise. Cite this article:
Journalism Facts for Kids. Kiddle Encyclopedia.