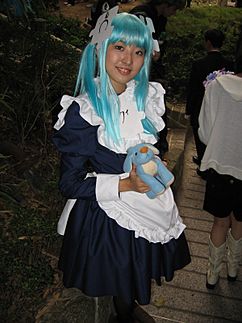 Cosplay (コスプレcode: ja is deprecated , kosupure) is a short way of saying of "Costume Play". It is an act of dressing up to look like an anime, manga, video game, Japanese rock, or Jpop character. A person who does this is called a Cosplayer.

Cosplay can be divided into two parts, basic cosplay and masquerade cosplay. Both types of cosplay involve trying to physically look like the character, including speaking like the character, memorizing quotes and so on. Masquerading, or "The Masquerade," usually refers to a cosplay competition where cosplayers demonstrate their skills in creating costumes, putting on skits, and in technical matters.

Even though cosplaying is originally from Japan, there are a number of cosplay communities in Malaysia, China, the United States, Indonesia, and the Philippines, because of the popularity of Japanese animation, movies, and popular culture in those countries.

Cosplay communities often hold events such as parties and conventions. Some of the best cosplayers can be famous amongst otaku.

All content from Kiddle encyclopedia articles (including the article images and facts) can be freely used under Attribution-ShareAlike license, unless stated otherwise. Cite this article:
Cosplay Facts for Kids. Kiddle Encyclopedia.