The Hatter is a fictional character in Lewis Carroll's 1865 book Alice's Adventures in Wonderland and its 1871 sequel Through the Looking-Glass. He is very often referred to as the Mad Hatter, though this term was never used by Carroll. The phrase "mad as a hatter" pre-dates Carroll's works. The Hatter and the March Hare are referred to as "both mad" by the Cheshire Cat, in Alice's Adventures in Wonderland in the sixth chapter titled "Pig and Pepper".

Main pages: Alice's Adventures in Wonderland and Through the Looking-Glass 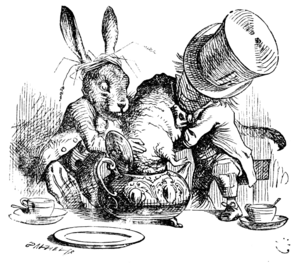 The March Hare and the Hatter put the Dormouse's head in a teapot, by Sir John Tenniel.

The Hatter character, alongside all the other fictional beings, first appears in Lewis Carroll's 1865 novel Alice's Adventures in Wonderland. In "Chapter Seven – A Mad Tea-Party", while exploring Wonderland, Alice comes cross the Hatter having tea with the March Hare and the Dormouse. The Hatter explains to Alice that they are always having tea because when he tried to sing for the foul-tempered Queen of Hearts, she sentenced him to death for "murdering the time", but he escapes decapitation. In retaliation, Time (referred to as "he" by the Hatter) halts himself in respect to the Hatter, keeping him stuck at 6:00 pm (or 18:00) forever. When Alice arrives at the tea party, the Hatter is characterised by switching places on the table at any given time, making short, personal remarks, asking unanswerable riddles, and reciting nonsensical poetry, all of which eventually drives Alice away. The Hatter appears again in "Chapter Eleven – Who Stole the Tarts?", as a witness at the Knave of Hearts' trial, where the Queen appears to recognise him as the singer she sentenced to death, and the King of Hearts also cautions him not to be nervous or he will have him "executed on the spot".

The character also appears briefly in Carroll's 1871 Through the Looking-Glass, the sequel to Alice's Adventures in Wonderland. Under the name of "Hatta," the Hatter was in trouble with the law once again. He was, however, not necessarily guilty, as the White Queen explained that subjects were often punished before they commit a crime, rather than after, and sometimes they did not even commit one at all. He was also mentioned as one of the White King's messengers along with March Hare, who went under the name of "Haigha." Sir John Tenniel's illustration depicts Hatta as sipping from a teacup as he did in the original novel. Alice does not comment on whether Hatta is the Hatter of her earlier dream. 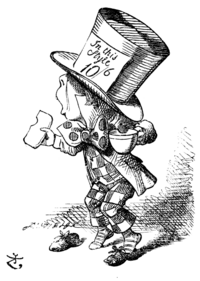 The Hatter enjoying a cup of tea and bread-and-butter, by Sir John Tenniel.

Mercury was used in the manufacturing of felt hats during the 19th century, causing a high rate of mercury poisoning among those working in the hat industry. Mercury poisoning causes neurological damage, including slurred speech, memory loss, and tremors, which led to the phrase "mad as a hatter". In the Victorian age, many workers in the textile industry, including hatters, sometimes developed illnesses affecting the nervous system, such as central nervous system (CNS) tuberculosis, which is portrayed in novels like Alton Locke by Charles Kingsley and North and South by Elizabeth Gaskell, which Lewis Carroll had read. Many such workers were sent to Pauper Lunatic Asylums, which were supervised by Lunacy Commissioners such as Samuel Gaskell and Robert Wilfred Skeffington Lutwidge, Carroll's uncle. Carroll was familiar with the conditions at asylums and visited at least one, the Surrey County Asylum, himself, which treated patients with so-called non-restraint methods and occupied them, amongst others, in gardening, farming and hat-making. Besides staging theatre plays, dances and other amusements, such asylums also held tea-parties.

Although, during the trial of the Knave of Hearts, the King of Hearts remarks upon the Hatter's headgear, Carroll does not describe the exact style of hat he wears. The character's signature top hat comes from John Tenniel's illustrations for the first edition, in which the character wears a large top hat with a hatband reading "In this style 10/6". This is further elaborated on in The Nursery "Alice", a shortened version of Alice's Adventures in Wonderland, adapted by the author himself for young children. Here it is stated that the character is wearing a hat on his head with a price tag containing the numbers 10 and 6, giving the price in pre-decimal British money as ten shillings and six pence (or half a guinea). 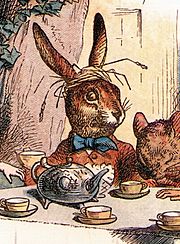 Illustration of the March Hare, one of the Hatter's tea party friends, by Sir John Tenniel.

The Hatter and his tea party friend, the March Hare, are initially referred to as "both mad" by the distinctive Cheshire Cat. The first mention of both characters occurs in the sixth chapter of Carroll's Alice's Adventures in Wonderland, titled "Pig and Pepper", in a conversation between the child protagonist Alice and the Cheshire Cat, when she asks "what sort of people live about here?" to which the cat replies "in that direction lives a Hatter, and in that direction, lives a March Hare. Visit either you like: they're both mad!" Both then subsequently make their actual debuts in the seventh chapter of the same book, which is titled "A Mad Tea-Party".

Hat making was the main trade in Stockport where Carroll grew up, and it was not unusual then for hatters to appear disturbed or confused; many died early as a result of mercury poisoning. However, the Hatter does not exhibit the symptoms of mercury poisoning, which include excessive timidity, diffidence, increasing shyness, loss of self-confidence, anxiety, and a desire to remain unobserved and unobtrusive.

It has often been claimed that the Hatter's character may have been inspired by Theophilus Carter, an eccentric furniture dealer. Carter was supposedly at one time a servitor at Christ Church, one of the University of Oxford's colleges. This is not substantiated by university records. He later owned a furniture shop, and became known as the "Mad Hatter" from his habit of standing in the door of his shop wearing a top hat. Sir John Tenniel is reported to have come to Oxford especially to sketch him for his illustrations. There is no evidence for this claim, however, in either Carroll's letters or diaries.

In the chapter "A Mad Tea Party", the Hatter asks a much-noted riddle: "Why is a raven like a writing desk?" When Alice gives up trying to figure out why, the Hatter admits "I haven't the slightest idea!". Carroll originally intended the riddle to be without an answer, but after many requests from readers, he and others—including puzzle expert Sam Loyd—suggested possible answers; in his preface to the 1896 edition of Alice's Adventures in Wonderland, Carroll wrote:

Inquiries have been so often addressed to me, as to whether any answer to the Hatter's riddle can be imagined, that I may as well put on record here what seems to me to be a fairly appropriate answer, "because it can produce a few notes, though they are very flat; and it is nevar put with the wrong end in front!" This, however, is merely an afterthought; the riddle as originally invented had no answer at all.

Loyd proposed a number of alternative solutions to the riddle, including "because Poe wrote on both" (alluding to Poe's 1845 narrative poem The Raven) and "because the notes for which they are noted are not noted for being musical notes". The April 2017 edition of Bandersnatch, the Newsletter of the Lewis Carroll Society [Issue 172, ISSN 0306-8404, Apr 2017], published the following solution, proposed by puzzle expert Rick Hosburn: "Why is a Raven like a Writing-desk?" "Because one is a crow with a bill, while the other is a bureau with a quill!" The RSPB, in its definition of Raven, states: "The raven [...] is all black with a large bill, and long wings." American author Stephen King provides an alternative answer to the Hatter's riddle in his 1977 horror novel The Shining. Snowbound and isolated "ten thousand feet high" in the Rocky Mountains, five-year-old Danny hears whispers of the malign "voice of the [Overlook] hotel" inside his head, including this bit of mockery: "Why is a raven like a writing desk? The higher the fewer, of course! Have another cup of tea!"

All content from Kiddle encyclopedia articles (including the article images and facts) can be freely used under Attribution-ShareAlike license, unless stated otherwise. Cite this article:
Hatter (Alice's Adventures in Wonderland) Facts for Kids. Kiddle Encyclopedia.