Alice is a fictional character and protagonist of Lewis Carroll's children's novel Alice's Adventures in Wonderland (1865) and its sequel, Through the Looking-Glass (1871). A child in the mid-Victorian era, Alice unintentionally goes on an underground adventure after accidentally falling down a rabbit hole into Wonderland; in the sequel, she steps through a mirror into an alternative world.

The character originated in stories told by Carroll to entertain the Liddell sisters while rowing on the Isis with his friend Robinson Duckworth, and on subsequent rowing trips. Although she shares her given name with Alice Liddell, scholars disagree about the extent to which she was based upon Liddell. Characterized by Carroll as "loving and gentle", "courteous to all", "trustful", and "wildly curious", Alice has been variously seen as clever, well-mannered, and sceptical of authority, although some commentators find more negative aspects of her personality. Her appearance changed from Alice's Adventures Under Ground, the first draft of Alice's Adventures in Wonderland, to political cartoonist John Tenniel's illustrations of her in the two Alice books.

Alice has been identified as a cultural icon. She has been described as a departure from the usual nineteenth-century child protagonist, and the success of the two Alice books inspired numerous sequels, parodies, and imitations, with protagonists similar to Alice in temperament. She has been interpreted through various critical approaches, and has appeared and been re-imagined in numerous adaptations, including Walt Disney's film (1951). Her continuing appeal has been ascribed to her ability to be continuously re-imagined.

Main pages: Alice's Adventures in Wonderland and Through the Looking-Glass 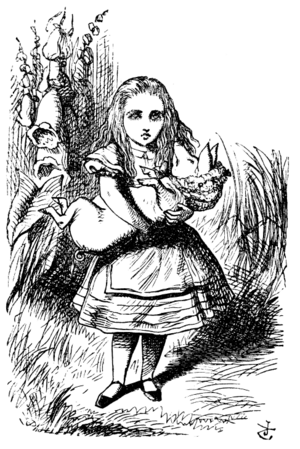 Alice is a fictional child living during the middle of the Victorian era. In Alice's Adventures in Wonderland (1865), which takes place on 4 May, the character is widely assumed to be seven years old; Alice gives her age as seven and a half in the sequel, which takes place on 4 November. In the text of the two Alice books, author Lewis Carroll often did not remark on the physical appearance of his protagonist. Details of her fictional life can be discovered from the text of the two books. At home, she has a significantly older sister, a brother, a pet cat named Dinah, an elderly nurse, and a governess, who teaches her lessons starting at nine in the morning. Additionally, she had gone to a day school at some point in her backstory. Alice has been variously characterised as belonging to the upper class, middle class, or part of the bourgeoisie.

When writing on her personality in "Alice on the Stage" (April 1887), Carroll described her as "loving and gentle", "courteous to all", "trustful", and "wildly curious, and with the eager enjoyment of Life that comes only in the happy hours of childhood, when all is new and fair, and when Sin and Sorrow are but names — empty words signifying nothing!" Commentators characterise her as "innocent", "imaginative", introspective, generally well-mannered, critical of authority figures, and clever. Others see less positive traits in Alice, writing that she frequently shows unkindness in her conversations with the animals in Wonderland, takes violent action against the character Bill the Lizard by kicking him into the air, and reflects her social upbringing in her lack of sensitivity and impolite replies. According to Donald Rackin, "In spite of her class- and time-bound prejudices, her frightened fretting and childish, abject tears, her priggishness and self-assured ignorance, her sometimes blatant hypocrisy, her general powerlessness and confusion, and her rather cowardly readiness to abandon her struggles at the ends of the two adventures—[....] many readers still look up to Alice as a mythic embodiment of control, perseverance, bravery, and mature good sense."

The degree to which the character of Alice can be identified as Alice Liddell is controversial. Some critics identify the character as Liddell, or write that she inspired the character. Others argue that Carroll considered his protagonist and Liddell to be separate. According to Carroll, his character was not based on any real child, but was entirely fictional. 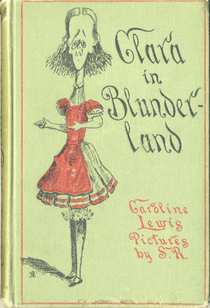 The cover of Clara in Blunderland (1902), a political parody of Alice in Wonderland

Alice has been recognised as a cultural icon. The Alice books have continued to remain in print, and the first book is available in a hundred languages. Alice's Adventures in Wonderland has continued to maintain its popularity, placing on surveys of the top children's books. Alice placed on a 2015 British survey of the top twenty favorite characters in children's literature. She also lends her name to the style of headband that she is depicted with in Tenniel's illustrations. The continued popularity of the two Alice books has resulted in numerous adaptations, re-imaginings, literary continuations, and various merchandise. The influence of the two Alice books in the literary field began as early as the mid-Victorian era, with various novels that adopted the style, acted as parodies of contemporary political issues, or reworked an element of the Alice books; they featured one or more protagonists with characteristics similar to Alice's ("typically polite, articulate, and assertive"), regardless of gender.

Alice's Adventures in Wonderland and Through the Looking-Glass were critically and commercially successful in Carroll's lifetime; more than 150,000 copies of Alice's Adventures in Wonderland and 100,000 copies of Through the Looking-Glass had been printed by 1898. Victorian readers generally enjoyed the Alice books as light-hearted entertainment that omitted the stiff morals which other books for children frequently included. In its review of the first Alice book, The Spectator described Alice as a "a charming little girl, [...] with a delicious style of conversation," while The Publisher's Circular lauded her as "a simple, loving child." Several reviewers thought that Tenniel's illustrations added to the book, with The Literary Churchman remarking that Tenniel's art of Alice provided "a charming relief to the all the grotesque appearances which surround her." Alice's character has been highlighted by later literary critics as unusual or a departure from the typical mid-nineteenth-century child protagonists. Richard Kelly sees the character as Carroll's creation of a different protagonist through his reworking of the Victorian orphan trope. According to Kelly, Alice must rely on herself in Wonderland away from her family, but the moral and societal narrative arc of the orphan is replaced with Alice's intellectual struggle to maintain her sense of identity against the inhabitants of Wonderland. Alison Lurie argues that Alice defies the gendered, mid-Victorian conceptions of the idealized girl: Alice does not have a temperament in keeping with the ideal, and she challenges the adult figures in Wonderland. 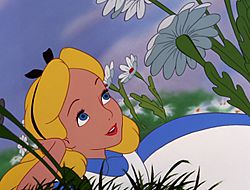 Alice, as she appears in Walt Disney's film adaptation (1951)

Described as "the single greatest rival of Tenniel," Walt Disney created an influential representation of Alice in his 1951 film adaptation, which helped to mould the image of Alice within pop culture. Although Alice had previously been depicted as a blonde in a blue dress in an unauthorised American edition of the two Alice books published by Thomas Crowell (1893), possibly for the first time, Disney's portrayal has been the most influential in solidifying the popular image of Alice as such. Disney's version of Alice has its visual basis in Mary Blair's concept drawings and Tenniel's illustrations.

In the twenty-first century, Alice's continuing appeal has been attributed to her ability to be continuously re-imagined. In Men in Wonderland, Catherine Robson writes that, "In all her different and associated forms—underground and through the looking glass, textual and visual, drawn and photographed, as Carroll's brunette or Tenniel's blonde or Disney's prim miss, as the real Alice Liddell [...] Alice is the ultimate cultural icon, available for any and every form of manipulation, and as ubiquitous today as in the era of her first appearance." Robert Douglass-Fairhurst compares Alice's cultural status to "something more like a modern myth," suggesting her ability to act as an empty canvas for "abstract hopes and fears" allows for further "meanings" to be ascribed to the character. Zoe Jacques and Eugene Giddens suggest that the character occupies a status within pop culture where "Alice in a blue dress is as ubiquitous as Hamlet holding a skull," which creates "the strange position whereby the public 'knows' Alice without having read either Wonderland or Looking-Glass." They argue that this allows for creative freedom in subsequent adaptations, in that faithfulness to the texts can be overlooked.

In Japan, Alice has a significant influence on pop culture. Tenniel's artwork and Disney's film adaptation have been credited as factors in the continuing favorable reception of the two novels. Within youth culture in Japan, she has been adopted as "a rebellion figure in much the same way as the American and British 1960s 'hippies' did." She has also been a source of inspiration for Japanese fashion, in particular Lolita fashion. Her popularity has been attributed to the idea that she performs the shōjo ideal, a Japanese understanding of girlhood that is "sweet and innocent on the outside, and considerably autonomous on the inside." 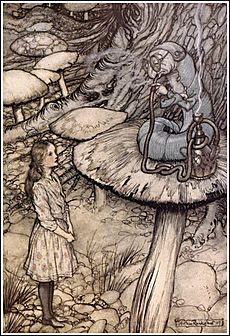 One of Rackham's art-nouveau illustrations, in which Alice encounters the Caterpillar (1907) 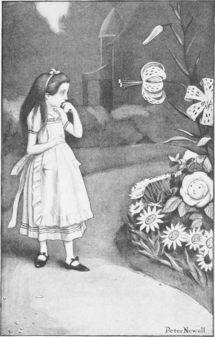 Newell's monochrome illustration of Alice among the Looking-Glass flowers (1901)

The two Alice books are frequently re-illustrated. The expiration of the copyright of Alice's Adventures in Wonderland in 1907 resulted in eight new printings, including one illustrated in an Art Nouveau style by Arthur Rackham. The illustrators for the other editions published in 1907 include Charles Robinson, Alice Ross, W. H. Walker, Thomas Maybank and Millicent Sowerby. Among the other notable illustrators are Blanche McManus (1896); Peter Newell (1901), who used monochrome; Mabel Lucie Atwell (1910); Harry Furniss (1926); and Willy Pogany (1929), who featured an Art Deco style.

All content from Kiddle encyclopedia articles (including the article images and facts) can be freely used under Attribution-ShareAlike license, unless stated otherwise. Cite this article:
Alice (Alice's Adventures in Wonderland) Facts for Kids. Kiddle Encyclopedia.