Bill the Lizard facts for kids

Bill the Lizard is a fictional character appearing in Lewis Carroll's 1865 novel Alice's Adventures in Wonderland.

Introduced in "Chapter Four – The Rabbit Sends a Little Bill", Bill the Lizard is perceived by Alice to be someone who does all of the hard work for The White Rabbit and the denizens of the community. When Alice becomes stuck in one of The White Rabbit's house's rooms from drinking from an unlabeled bottle that made her grow uncontrollably, the rabbit's attempts to get in through the door and window fail. Bill the Lizard is sent to go through the chimney to investigate, since he and another creature have a ladder in their possession. Unwilling to let Bill get through the chimney, Alice uses her now huge foot, which is in the chimney, to kick Bill into the air. He manages to survive the fall thanks to fellow creatures.

Reappearing in "Chapter Eleven – Who Stole the Tarts?", Bill is a juror in the trial of The Knave of Hearts' supposed theft of The Queen of Heart's tarts. When his pencil squeaks too much on his slate, it annoys Alice to the point that she takes the pencil from him. Not knowing where it went, Bill the Lizard starts using his finger to write, even though it left no mark on the slate. In "Chapter Twelve – Alice's Evidence", he becomes disheveled when the "mile-high" Alice disturbs the jury by messing up the jury box. When Alice puts Bill the Lizard back in his place, he stares blankly up in the sky. Then later, the Queen provides ink for Bill when she spills ink on his face. 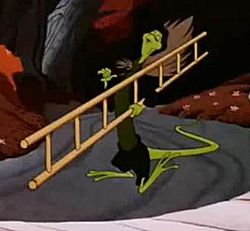 Bill makes a brief appearance in the Disney film based on the book. Here, he is portrayed as a chimney sweep with a Cockney accent who is recruited by the White Rabbit and the Dodo to go down the Rabbit's chimney to pull the "monster" (Alice, made giant) out of the house. He seems all right with the task at first, but when he sees Alice in the window and realizes that he's been asked to retrieve a "monster", he tries to run in terror. However, the Dodo catches him and forces him down the chimney, telling him this could be his moment of glory. Unlike the book, he is not kicked out, since Alice's hands and legs are sticking out outside of the house. Instead, he spreads a lot of soot, causing Alice to begin to sneeze. Hearing her inhale frantically, the White Rabbit hides and the Dodo is knocked off the roof from Alice wriggling inside as she tries to suppress the sneeze. Bill, however, cannot escape in time, and Alice's sneeze is so big it blows all the soot out of the house and rockets Bill into the sky. The Rabbit and Dodo watch him disappear and Dodo smiles, "Well, there goes Bill." Alice, recovered from her sternutation, peeps out the window and utters: "Poor Bill." He is not seen again. He was voiced by Larry Grey.

A lizard identical in both appearance and voice is a member of Ratigan's gang in the film The Great Mouse Detective. He was voiced by Wayne Allwine, who was best known as the voice of Mickey Mouse. He was once briefly voiced by Charles Fleischer, who also voiced Roger Rabbit in Who Framed Roger Rabbit, even though his voice actor was never in the end credits. In Who Framed Roger Rabbit, Bill can be spotted in the beginning scene of the film helping someone hold a ladder.

Bill (under the name of Bill McGill) makes a cameo in the video game American McGee's Alice, voiced by Andrew Chaikin. He is much more chameleon-like and appears to be a builder, and wears a toolbelt, cap and waistcoat. He has a very cynical outlook on life and repeatedly asks Alice for brandy, until a gust from the Duchess's house forces Alice inside, causing him to run in fear. He later appears again, and explains that he'll have the leeches in to clear up the remains of the defeated Duchess. Bill is last seen at the end of the game, during Wonderland's return to peace.

Once Upon a Time in Wonderland

A character very loosely based on Bill by the name Elizabeth appears in Once Upon a Time in Wonderland, portrayed by Lauren McKnight. Going by the nickname "Lizard", Elizabeth is a young woman who is one of Caterpillar's Collectors. Alice meets her upon attempting to locate the Knave of Hearts (who in this series is Will Scarlet) after the two split up. She tells Alice that she and the Knave were great friends in his earlier days, assisting him with many battles in Wonderland. She also reveals of his love for Anastasia, and this being the real reason that he escaped Wonderland....to forget her abandonment of him. Lizard later attempts to help Alice rescue the Knave, though she is knocked out by Jafar. She does regain consciousness where she sees Anastasia looking at the Knave's petrified form. Later after bathing in the river, Elizabeth finds Cyrus' lamp where the Knave of Hearts is now residing. She does make some wishes which improves a nearby town. Elizabeth then admits to the Knave of Hearts that she has feelings for him. After unwittingly making her third wish for the Knave of Hearts to feel something for her, Elizabeth falls dead. The Jabberwocky later finds Elizabeth's dead body and takes her eyes so that Jafar can track down Cyrus' lamp.

Bill the Lizard appeared in the Sunsoft's 2006 mobile game Alice's Warped Wonderland (歪みの国のアリス, Yugami no kuni no Arisu, Alice in Distortion World). Bill takes the form of a slender young man with lizard-like attributes, including a forked tongue, reptilian eyes, and green hair. Bill serves as the "Keeper of Truth" and is the character who guards Ariko's (the "Alice" of the game) suppressed tragic memories until she is ready to accept them.

All content from Kiddle encyclopedia articles (including the article images and facts) can be freely used under Attribution-ShareAlike license, unless stated otherwise. Cite this article:
Bill the Lizard Facts for Kids. Kiddle Encyclopedia.