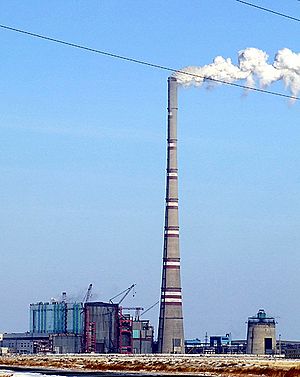 The world's tallest chimney can be found at Ekibastuz, Kazakhstan.

A chimney is a structure used to ventilate hot flue gases or smoke from a boiler, stove, furnace or fireplace to the outside atmosphere. Most chimneys are vertical, or almost vertical, to make sure that the gases flow easily, drawing air into the combustion in what is known as the stack, or chimney, effect. The space inside a chimney is called a flue. Chimneys may be found in buildings, steam locomotives and ships. In the United States, the term smokestack is also used when talking about locomotive chimneys or ship chimneys, the word funnel can be used too.

The Height of a chimney is really important, when higher, chimney's dispersion of pollutants will not cause too much influence on surrounding areas. Tall chimneys also allow chemicals to self-neutralize in the air before they reach the ground. 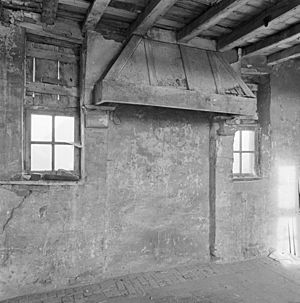 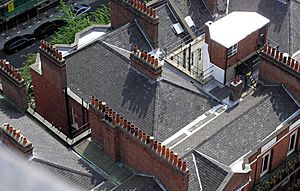 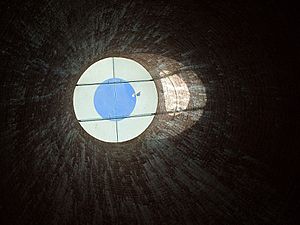 Seagull sits on top of a hot gas cooling chimney at The World of Glass St. Helens UK.

Romans used tubes inside the walls to draw smoke out of bakeries but chimneys only appeared in large dwellings in northern Europe in the 12th century.

Chimneys in ordinary dwellings were first built of wood and plaster or mud. Since then chimneys have traditionally been built of brick or stone, both in small and large buildings. Early chimneys were of a simple brick construction. Later chimneys were constructed by placing the bricks around tile liners. To control downdrafts, venting caps (often called chimney pots) with a variety of designs are sometimes placed on the top of chimneys.

All content from Kiddle encyclopedia articles (including the article images and facts) can be freely used under Attribution-ShareAlike license, unless stated otherwise. Cite this article:
Chimney Facts for Kids. Kiddle Encyclopedia.