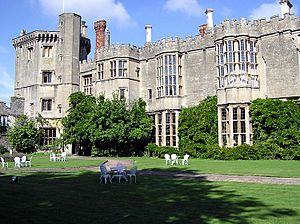 Thornbury Castle is a Tudor castle in the parish of Thornbury, in Gloucestershire, England, situated next to the parish church of St Mary, founded in the Norman era. Construction was begun in 1511 as a further residence for Edward Stafford, 3rd Duke of Buckingham (1478-1521), of Stafford Castle in Staffordshire. It is not a true military fortress but rather an early example of a Tudor country house, with minimal defensive attributes. It is now a grade I listed building.

The site was occupied by a manor house in 930; Jasper Tudor, Duke of Bedford & Earl of Pembroke, died in the Manor House in 1495. Part of the original plans for a very grand residence were "well advanced", with a Licence to crenellate being granted in 1508, before the 3rd Duke of Buckingham was executed for treason in 1521, by order of King Henry VIII. As at Richmond Palace in Surrey, the main ranges of Thornbury framed courts, of which the symmetrical entrance range, with central gatehouse and octagonal corner towers, survives, together with two less regular side ranges with many irregular projecting features and towers.

Following the 3rd Duke's death Thornbury was confiscated by King Henry VIII of England, who stayed there for ten days in August 1535 with Queen Anne Boleyn. In 1554 Queen Mary granted the castle and manor to Henry Stafford, 1st Baron Stafford. Following the Civil War, the castle fell into disrepair, but was renovated in 1824 by the Howard family.

The castle is now a 26-room luxury hotel and restaurant, and a venue for weddings. Between 1966 and 1986 the castle was operated as one of the UK's top restaurants by Kenneth Bell MBE with staff including food writer Nigel Slater and MasterChef New Zealand judge Simon Gault early in their culinary careers.

All content from Kiddle encyclopedia articles (including the article images and facts) can be freely used under Attribution-ShareAlike license, unless stated otherwise. Cite this article:
Thornbury Castle Facts for Kids. Kiddle Encyclopedia.